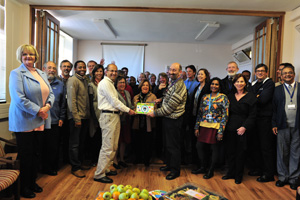 Staff (past and present) and former students recalled milestones and highlights as they celebrated the 40th birthday of UCT's School of Public Health and Family Medicine (PHFM) last week.

Professor Marian Jacobs, dean of the Faculty of Health Sciences and a 1979 graduate of the school, was also in attendance. She pointed out that the work of the PHFM demonstrated that "excellence with relevance" was possible.

Proceedings were led by the long-serving Professor Margaret Hoffman, now honorary research associate in the school's Women's Health Research Unit. She described the changes to both the names and roles of the PHFM since its inception in 1972, when the first chair in comprehensive medicine was created.

Today the staff complement is more than 150 - up significantly from the six who started at the school in 1972, reported Hoffman. Postgraduate students number over 250, and a wide range of research activities across the field of public health have been consolidated.

Hoffman pointed out that in an inaugural lecture in 1999, public health was described as the 'Cinderella' discipline in health sciences; the question was then posed, "Will Cinderella become queen?" Her answer today?

"We can confidently say Cinderella is a princess ... maybe even the queen," said Hoffman.