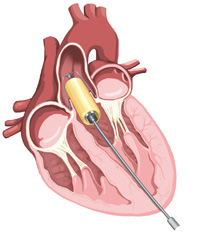 Heart of the design: This illustration shows the deployment device for the UCT-developed heart valve, which will allow the insertion of a trans-catheter valve not only without open heart surgery, but under simple conditions and without obstructing the blood flow out of the heart during the procedure.

Research at UCT into the development and manufacture of devices that can replace damaged heart valves without the need for expensive open-heart surgery is attracting the right sort of interest.

The project has already sparked the formation of two new biotechnology companies - Southern Access Technologies Holdings (SATH) and its subsidiary, Southern Access Technologies (SAT) - which together have drawn investments totalling R30 million. SATH has raised R18 million from the Bidvest Group, while SAT has been granted another R12 million by the national Technology Innovation Agency.

The funds will be used to develop a new technique to assist victims of rheumatic heart disease, which is estimated to affect up to 78 million people worldwide, particularly in emerging and developing countries.

The project will tackle heart-valve diseases through the development of devices that can be deployed under conditions prevalent in developing countries and emerging economies, without requiring open-heart surgery and sophisticated operating theatres.

SATH's heart-valve technology is based on research conducted at UCT, which is a major shareholder in the company. The company will begin immediately to develop prototypes for a heart valve, a delivery device for trans-catheter heart valves, and a clip device for the repair of heart valves.

The SATH products will be available at substantially lower cost than those of commercially available catheter-delivered valves.

Catheter-based heart-valve replacement has fast gained ground in the treatment of very old, inoperable patients with degenerative heart disease in the developed world, says Professor Peter Zilla, founder of SAT and head of UCT's Department of Cardiothoracic Surgery. Now the rest of the world can also benefit from this procedure.

"Counterintuitively, this latest technology holds the key for the millions of patients in developing countries that have no access to open heart surgery," says Zilla.

The trick has been to find local alternatives to what's available in Europe and North America, he explains. This includes the use of synthetic materials for the heart valve, sidestepping the "monopoly" on treated animal tissue traditionally used to produce such valves in developed countries, and so cutting the price by some margin.

In addition, the procedure to place the valves will additionally be substantially cheaper, most notably because open-heart surgery will not be required. The therapies, Zilla explains, can be conducted in secondary hospitals that now lack the technology needed to treat the same heart condition, thus opening up new markets for heart valve products.

"Through UCT's intellectual property, the placement will be possible under secondary hospital conditions, undercutting the expenses of sophisticated infrastructure and specialist expertise," says Zilla.

Testing of the products is expected to begin in late 2013.