Particle's discovery is a mass-ive moment 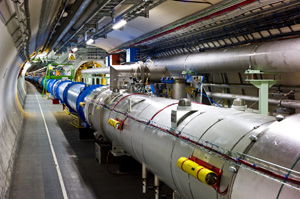 Views of the LHC machine in the tunnel at the junction part with the beam dump at point 6. (Image courtesy of Maximilien Brice, 25 Jul 2008, CERN accredited.)

The scientific world is all abuzz, this following the announcement that physicists have finally spotted, albeit briefly, the long-postulated but till now elusive Higgs boson particle.

The particle was observed in experiments run at the Large Hadron Collider (LHC), the multi-billion-Euro facility established by the European Organisation for Nuclear Research, or CERN, along the border of Switzerland and France. Here scientists have been smashing together subatomic particles known as protons at an energy level said to reach about 7 trillion electron volts.

The Higgs boson is an elementary particle that was first predicted in the 1960s by Edinburgh University physicist Peter Higgs and his collaborators as part of the electroweak symmetry breaking mechanism, which also predicted the existence of two 'weak' bosons, the W and Z bosons. In particle physics, this mechanism describes the process that imparts mass to elementary particles, the Higgs boson being the key particle of this mechanism.

The W and Z bosons were discovered at CERN in 1983, although a particle thought to be the Z boson was first seen as early as 1973. But the Higgs boson - said to make up what's known as the Higgs field, which determines why some particles feel heavy and others light, depending on the force of the Higgs field acting on them - remained obstinately camera-shy.

Until now, if scientists are correct.

It's a huge moment, says Dr Andrew Hamilton of UCT's Department of Physics and a member of the 25-year-old international ATLAS Collaboration. This network is named after the particle detector at the LHC dedicated to detecting the Higgs boson and other subatomic particles.

A word of caution is required, however, notes Hamilton. The particle that was observed would seem to meet all the features that scientists had forecast the Higgs boson would have. But this still has to be confirmed.

"We are not certain that this is the Higgs particle," says Hamilton. "While it has some of the properties we expect, there is much more that we need to study."

But whether it is or isn't, it certainly opens up new and more focused research opportunities for those in particle physics, adds Hamilton. Not least for those collaborators in South Africa, including UCT's own Emeritus Professor Jean Cleymans, who leads the South Africa-CERN programme - a collaboration of eight South African universities participating in experiments at CERN.

"It's a moment that has been over 40 years in the making," says Hamilton. "The detectors that have observed this particle were first talked of 28 years ago, and many billion Euros have been spent to discover this particle."

The early discovery would suggest that it's been money well spent.