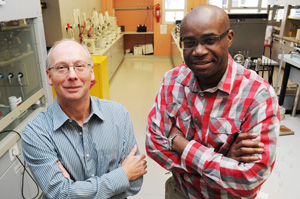 Joint venture: With a long track record in the pharmaceutical industry, Dr Leslie Street (left) has joined in on the efforts of UCT's Prof Kelly Chibale (right) to show scientists in Africa how to discover drugs to treat conditions of local concern.

If imitation is the sincerest form of flattery, UCT's Professor Kelly Chibale is very taken with the pharmaceutical industry's ingenuity and systems when it comes to discovering and developing new drugs.

To help him imitate that expertise, he has called in someone from the industry - Dr Leslie Street, a senior scientist with more than 25 years' experience in the pharmaceutical sector, has become the first recruit of Chibale's Drug Discovery and Development Centre (H3-D).

One of Chibale's rallying calls over recent years has been the need to build drug-discovery capacity in local academic institutions, perhaps matching that of the international pharma industry. "We will be training a new generation of African scientists in the modern tools of conducting drug discovery," he said at the launch of H3-D in April 2011.

Which is where Briton Street will come in. As head of medicinal chemistry and principal research officer, he will lead the H3-D's research project that is looking at a number of compounds - already identified by Chibale and his team of researchers - that could perhaps lead to drugs for the treatment of malaria. He will also get involved in similar projects on candidate compounds for anti-tuberculosis drugs, as well as candidate drugs for potential use in the diabetes, cardiovascular and fibrosis disease areas.

Street comes to UCT with exactly the kinds of credentials and experience Chibale is hoping H3-D will emulate. He was a distinguished senior investigator at the large pharmaceutical company Merck in the UK for 20 years, working on a suite of neuroscience projects and drugs. For the past five years or so, he was a senior director of medicinal chemistry at Cortex Pharmaceuticals in California in the US.

Street will also stay at the H3-D for five years; it's a tight but not impossible schedule, he says.

"I will focus on areas where there's a significant medical need to find new drugs. And five years is long enough to do that," he notes confidently.