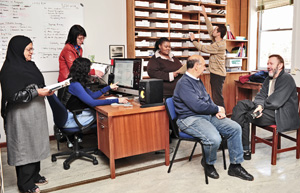 The Centre for Popular Memory (CPM) had every reason to roll out the fanfare when it celebrated its 10th anniversary in May.

For one thing, the Centre has made a substantial contribution to UCT's social responsiveness efforts over the past decade. It did so by taking archiving of South Africa's oral history to new levels, increasing intellectual capacity in this area, and making the stories of everyday South Africans accessible.

The CPM started in 2001 when the unit not only changed its name '“ from the Western Cape Oral History Project, which originally began in 1985 '“ but its vision too.

Dr Sean Field, CPM director, recalls that at the time there was a turn to memory studies internationally. In response, the Centre began devoting considerable energies to develop sound and audio-visual archiving. An archive architecture was created with established conservation practices in mind, and the centre also developed a fully-searchable catalogue.

"The central idea was to make it easier for users to access our archives," Field says. "We had online catalogue before, but the important thing about this new one is that researchers can simply flick through and see exactly what is in every collection and have interview summaries, which is critical."

Today, the Centre's archives cover topics such as Western Cape communities, the memories of people with HIV, politics and war history, migration and refugees, and work and leisure.

From the outset the Centre also adopted a policy to use multimedia (still in its infancy then) and multilingual media to disseminate its records, primarily audio and video recordings. These recordings were central to the production of books, radio programmes, film documentaries, exhibitions and community theatre.

One of the highlights of the decade has been its five-year Bridging the Digital Divide Schools Project. In this initiative, staff from the CPM taught over 1,000 learners across schools in disadvantaged communities how to implement an oral history project, and how to transfer their audio material to web-based media.

"That project had a ripple effect," says Field. "It has an ongoing impact in schools and learners we trained are still coming through to enter the university."

In total, the CPM has produced six film documentaries, five books, and published over 30 articles over the past 10 years. But Field and his colleagues are not resting on their laurels, and they are about to launch a large scale video-taped oral history research and archiving project titled Memories of Apartheid.

In addition, it launched, at its birthday bash, a new holding catalogue, which Field describes as "an improved physical and online resource", containing detailed interview summaries to speed up access for user.

The guest speaker at the event was international oral-history pioneer Professor Alessandro Portelli, a Mellon Visiting Fellow, who spoke about Sound and Meaning: In and beyond oral history.