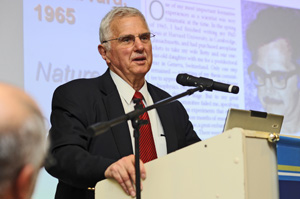 Inquiry: Prof Bruce Alberts spoke on the need for how science is taught at both schools and universities.

If 12 years in Washington taught him anything, it's that science is even more important than most scientists think.

So said Bruce Alberts, professor emeritus of biochemistry and biophysics at the University of California, San Francisco, and editor-in-chief of the august Science magazine, in his Vice-Chancellor's Open Lecture at UCT on 23 May. Those 12 years, he explained, were spent as president of the US National Academy of Sciences (NAS), based as he was in the US capital from 1993 to 2005.

Over this period he would begin to appreciate the value of science in shaping policy, Alberts said. One of the first reports he would oversee was on the perils of exposure to residential electric and magnetic fields . (It's not perilous, the NAS concluded).

Another study, on the presence of arsenic in drinking water, helped overturn a policy of the Bush administration (itself a one-eighty on a Clinton-era policy) that allowed for greater amounts of the element in drinking water.

But if scientists are going to influence the world in this manner and forge the "scientific temper" once touted by Jawaharlal Nehru, the first prime minister of independent India, one area that needs addressing is science education, said Alberts. This has to be done both at schools, where rote learning has become the norm, to universities, where the next generation of science teachers are moulded.

"To generate the scientific temper for any national, we need to redefine what is meant by science education at all levels, from kindergarten to college."

Memorising meaningless scientific jargon '“ as kids in his home state of California still do '“ puts children off science, he argued. Instead, what is required is an inquiry-based science education. It's a call to arms Alberts has taken up as editor-in-chief of Science. The magazine has done this through, among other initiatives, special editions dedicated to science education, its Science Prize for Online Resources in Education, and a new project known as Science in the Classroom, in which one article from the magazine is adapted for entry-level science students every month.

He's also spread this gospel of inquiry-based education in his role as science envoy to Indonesia, a post he was appointed to by US President Barack Obama in 2009. Rather than prescribe fixes to other countries' problems, he and other envoys instead propose that capacity is built in these countries so they can tackle their problems themselves