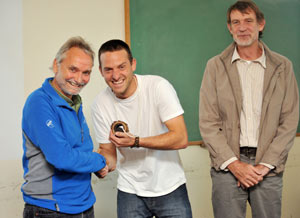 Fine fynbos: Dr Jasper Slingsby (middle) receives his medal from Prof Jeremy Midgley (head of the Department of Botany), under the supervision of dean of the Faculty of Science, Prof Anton le Roex.

In a bid to find new ways to celebrate scientific excellence, the Faculty of Science hosted its first faculty research awards on 24 May.

Three prizes were handed out - two for the best-cited research papers for work done at UCT over the period 2008-2012, in which a UCT researcher played a leadership role, and the Dean's medal for the top PhD student for 2011.

With some 90 citations for his single author paper What Limits Trees in C-4 Grasslands and Savannas?, published in the Annual Review of Ecology, Evolution and Systematics in 2008, Professor William Bond of the Department of Botany was named the winner in the professor/associate professor category.

Dr Chris Clarkson of the Department of Mathematics and Applied Mathematics won the lecturer/senior lecturer category for lead authorship on his paper A General Test of the Copernican Principle, published in Physical Review Letters, a paper that has been cited 58 times since its publication in 2008.

The Dean's Medal for the best PhD student in 2011, bequeathed by Professor Daya Reddy, former dean of the Faculty of Science, was awarded to Dr Jasper Slingsby, also of the Department of Botany. To mark his win, Slingsby presented a talk, titled Ecological Diversification and the Evolution and Maintenance of Fynbos Diversity, on the day.

The presentation of awards was celebrated with beer, samosas and biryani.