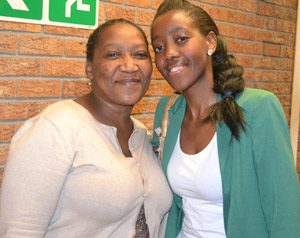 Far and near: Mandisa Mazibuko (right), off to the US on a Fulbright Scholarship later this year, reunites with ASPECT's Linda Nkomo, described as a mother to all students on the programme.

It was a full two days after receiving telephonic notice of her successful application that it finally sunk in for UCT alumnus Mandisa Mazibuko that she had actually won a Fulbright Scholarship.

That was when Mazibuko received an email confirmation that she would be reading for a master's degree in engineering management at Duke University in the US. Only then did it finally (and joyfully) click: "Oh, that's what the girl on the phone said!"

Mazibuko started her studies at UCT on the Academic Support Programme for Engineering in Cape Town (ASPECT), the academic development initiative of the Faculty of Engineering & Built Environment.

Since graduating with a degree in civil engineering in 2009, the former student has steadily been making her mark in the industry. Between working as a design and contracts engineer in the Free State, Pretoria and Limpopo, Mazibuko was chosen as a delegate at 2010's Brightest Young Minds Summit, sat on the national executive committee of South African Women in Engineering - an association of young women engineers started at UCT - and received a scholarship from information and communications technology company T-systems that took her to Germany for a course on how to run a global technology corporation.

She has also co-founded a not-for-profit organisation called Letha Ithuba ("bringing opportunity"), which is aimed at rural empowerment through education, beginning with a rural area in Estcourt, KwaZulu-Natal, where Mazibuko was born.

She will leave for Duke University in September this year.

Mazibuko hopes that the Fulbright Scholarship - which includes an internship in the US after graduation - will broaden her perspective of the inner workings of the engineering industry.

"I want to take it all in and see how I can use it to my advantage when I get back," she says.