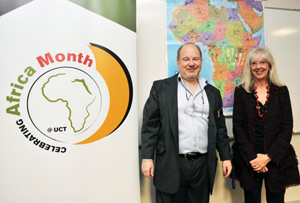 Breaking new grounds: Assoc Prof Glen Holman and Prof Jennifer Roeleveld at the official launch of the Department of Finance and Tax; Holman is head of department, Roeleveld head of the tax section.

The global derivatives industry is valued at around US$700 trillion. Yet, except for South Africa, few African companies have a finger in this pie.

So said Professor Glen Holman, head of UCT's new Department of Finance and Tax, in his 8 May lecture, Derivatives in Africa. The lecture tripled up as part of the university's Celebrating Africa Month schedule, and as the formal launch of the new department.

In his talk, Holman reported that a massive 70% of the listed companies in Africa that do make use of derivatives - used to protect investors and companies against everything from the ups and downs of exchange rates to changes in interest rates - are based in South Africa. The data was gained by analysing the annual reports of over 900 African companies, including French and Arabic versions.

There may be good reasons while the rest of Africa hasn't followed suit, he noted. It could be that they have insignificant exposure to such risks, or manage exposure to risk via other means, or they could have concerns about the accounting or the costs of maintaining derivative programmes.

In their study, Holman and his team of nine master's students found that the use of derivatives were exclusively for hedging against currency risk. Financial instruments such as forwards and swaps were found to be the most preferred.

But Holman was optimistic that the rest of Africa would soon enter the derivatives market. "I expect the number of companies using swaps, for instance, to grow quite significantly in future," he said.