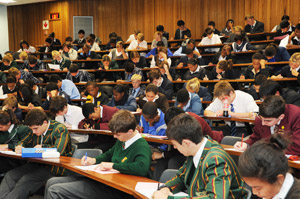 The campus will be congested on the evening of 16 April when over 8 000 learners like these converge for the annual UCT Maths Competition.

Congestion is expected as a record entry of 8 312 participants from a record 153 Western Cape schools converges on upper campus on Monday evening, 16 April, for the annual UCT Mathematics Competition.

After registration, the young maths boffins will gather in 63 different venues across the campus to write the contest papers. Over 200 maths teachers from local schools will assist.

Engineering group Aurecon has donated R20 000 towards transport for 283 participants from 13 schools in Khayelitsha.

Separate papers for each of grades 8 to 12 have been set by a committee of maths teachers and UCT lecturers. The problems are designed to test insight and creative thinking, unlike school exams that consist of standard exercises requiring stereotyped solutions.

While the best pupils will vie against each other for top honours as individuals, those who feel that two heads are better than one may compete as pairs. Pairs and individuals write the same paper, but are ranked separately.

The results will announced at a prize giving on 7 June 2012 in the Baxter Concert Hall.

The UCT Mathematics Competition is sponsored by Aurecon and Capitec Bank, with prizes donated by Casio and Oxford University Press.