Build a house, build a community 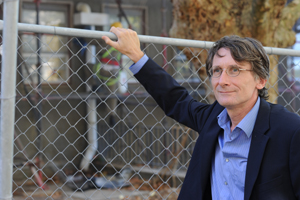 Constructing a future: The housing sector, one of the most productive in the country, holds many advantages, says Prof Francois Viruly.

A new study reveals that the housing sector offers hope for tenants and the unemployed alike.

It's not just tenants who benefit from new houses.

Sure, housing units provide growth, sustainable communities, and safety and security. But a new study shows that the housing sector also boasts one of the highest employment multipliers, a measure of job creation based on direct and indirect benefits.

The 10-month study commissioned by International Housing Solutions, a global private equity investor, was conducted by a team led by Professor Francois Viruly of UCT's Department of Construction Economics and Management. The purpose of the study was to audit the social and economic impacts of integrated, affordable housing developments, and to determine the indirect benefits derived from living in such communities.

Interviewing tenants and developers, Viruly and his team found that it takes between 1,200 and 1,500 man-hours to build a 40m2 house. This comprises 541 hours of skilled and 748.8 hours of unskilled work, which translates to 2.45 people employed continuously to complete a typical house in 13 weeks.

Regarding the social impact of such developments, Viruly noted that tenants reported an improvement in the quality of life for children, health and housing.

More than 50% of households have also seen an improvement in access to education and employment from the property that they occupy.

"The overall conclusion is that the developments surveyed provide benefits that go well beyond the mere provision of housing; rather, they are playing an important role in creating sustainable human settlements," said Viruly.

The study comes after reports that South Africa's approach to addressing the housing backlog will move - from a focus on the provision of free housing, to the development of affordable housing. This, it is hoped, will allow families to get onto and move up the housing ladder.

From an employment point of view, the building of homes is a relatively good performer, with a direct multiplier of 4.74, a measure of the number of jobs created per R1 million of capital expenditure.