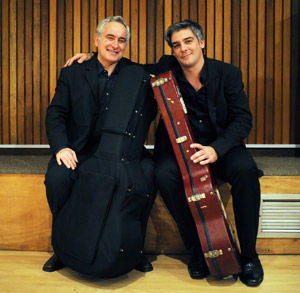 Lovers of six-string classical music take note - the guitar series now on at the SACM is a box office hit.

Seats were snapped up at the first instalment of Magnum Opus - a series of three concerts organised by head of classical guitar studies at UCT's South African College of Music (SACM), James Grace, under the umbrella of his record label, Stringwise Records.

Italian guitarist and professor of guitar at the Rossini Music Conservatoire in Pesaro, Italy, Giuseppe Maria Ficara, kicked off the trilogy on 4 April, performing works by Frescobaldi, Paganini and Giuliani. Grace joined Ficara to round off the night with a performance of Sonatina Canónica by Castelnuovo Tedesco.

The next concert, on 18 April, by Goran Krivokapi, lecturer at the prestigious Koblenz International Guitar Academy in Germany, will include the debut work by SACM head of theory, Associate Professor Hendrik Hofmeyr.

Grace ends the series on 25 April with his favourite pieces, including a version of Abdullah Ibrahim's The Wedding.

"The classical guitar world is relatively small," says Grace. "Building up relationships and bridges with other institutions around the world is key."

Ficara and Krivokapic have performed on separate occasions in South Africa before, says James, and have both taught master's classes at UCT. "To have them finally performing here seems like a natural progression."