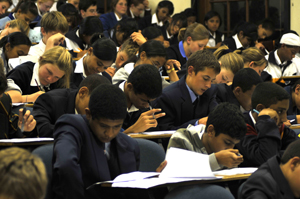 Figure that: UCT's experience in hosting the annual UCT Mathematics Competition - scheduled in 2012 for 16 April - will stand it in good stead when it stages Africa's first International Mathematics Olympiad in 2014.

UCT will host the 2014 International Mathematical Olympiad (IMO) in July 2014.

The IMO is the world championship of mathematics, launched in Romania in 1959. The oldest and biggest of the major international science olympiads for high schools, it today draws participants from more than 100 countries, representing 85% of the world's population.

Cape Town was selected as the host city by the South African Mathematics Foundation (SAMF). It will be the first IMO to be held in Africa.

Johann Engelbrecht, the executive director of SAMF, said: "2014 could be just what mathematics in South Africa needs. It is an opportunity to show the world that we are able to host world-class events and that we have world-class mathematicians."

Professor John Webb, emeritus professor of mathematics at UCT, will chair the local organising committee. Webb was responsible for taking the first South African teams to the IMO in 1992, and is currently secretary of the IMO Advisory Board.

"Hosting the IMO is a major task, and we will be calling upon other Western Cape universities to join us in this project," said Webb. "Local maths teachers will also be recruited to give a hand."

South Africa has taken part in the IMO every year since 1992, and over the years South African teams have won a total of 42 medals: one gold, nine silver and 32 bronze.

Countries enter teams of up to six students, who must be 19 years old or younger and not registered at university. The teams write two very challenging problem papers over two days. Each paper consists of just three problems.

"The problems are very tough," said Webb, "and even experienced university mathematicians find them a challenge to crack."