SHAWCO's weekend special on the up 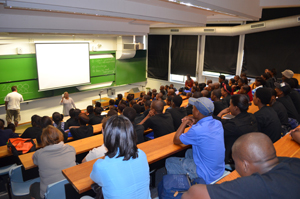 Classy work: SHAWCO Saturday School has generated a couple of new spinoffs, and grown in size and ambition.

The Saturday School was a 'modest little' project when the Students' Health and Welfare Centres Organisation (SHAWCO) first started it in 2007, running classes for 200 grade-12 learners from disadvantaged schools on Saturday mornings.

Five years on and the project has tripled in size, with 32 educators now teaching classes in maths, English, physical science, life science and accounting to 600 learners. It now incorporates not just the Saturday School, but also the 100 learners from UCT's 100-Up programme and a further 300 from the spinoff SHINE Programme.

While the Saturday School catered exclusively for learners from schools operating in impoverished areas around the Cape Peninsula, SHINE, established in 2010, recruited fee-paying students from more affluent backgrounds and schools.

The SHINE programme has been so successful that it has generated a slight surplus that SHAWCO will be using to subsidise the Saturday Schools when the five-year funding from Bombardier Transport Company runs out at the end of 2012.

SHAWCO's director, Varkey George, explains that by 2013 the entire project will have become financially self-sustainable, a recurring motif in SHAWCO's vision.

"One of our vice-chancellor's concerns, the preparation of learners from our townships to be admitted to UCT, is also being addressed through this initiative," says George. "SHINE allows the organisation to make a positive difference in the lives of the project's learners."

Not so little anymore, then.