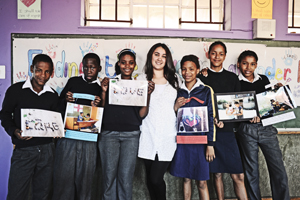 Aiming for the heart: (Clockwise from main picture) Occupational therapy student Dene Benjamin (centre) with (from left) Brandon Dreyer, Sello Tau, Samantha Jantjies, Aminah Nelson, Sadia Bredekamp and Melody Swarts, some of the kids that took part in her project, Where is the Love?; Through images and words, the learners captured their connection with their community; Brandon Dreyer and Donveno Samuels inspect their handiwork; The learners celebrated the project with teachers, family and friends. (All pictures by Katherine Traut.)

Samantha lives in a world where gangs rule, and dreams go up in [tik] smoke.

But she knows love, she'll say. For her, it's her best friend.

"I feel it when she hugs me," the grade-seven learner says. "There's love in Lavender Hill, but the gangsters and fighting put it down."

Samantha is one of 18 learners from Zerilda Park Primary school in Seawinds, Lavender Hill, who took part in a project by fourth-year occupational therapy student Dene Benjamin. The five-week project, titled Where is the Love?, addressed aggression among these learners by identifying alternative anger management techniques; in this case, photography.

The project is part of Benjamin's practice placement, a mandatory exercise for all UCT health sciences students. She leapt at the opportunity to work in Lavender Hill "because there is a huge need in the community".

An assessment of the learners at the school, Benjamin explains, found that their interactions were mostly violent. "Even their play was often based on fighting, and this impacted on their occupational experiences in the classroom."

And so harnessing a technique known as Photovoice, a community development tool that combines photography and narrative, Benjamin armed the learners with disposable cameras and asked them to take snapshots of everyday interactions between learners themselves and between learners and teachers, on the one hand, and pictures of love on the other. The pictures then formed the basis for classroom discussions on the feelings they evoke, and on how to adopt better life skills.

In this process, a space was created for the learners to explore and identify alternate ways of expressing and dealing with emotions so as to allow for more positive interactions and occupational experiences.

The children have the capacity to love, says Ronald Zamanjah, a teacher at the school. They just live in a community "where there is very little of it to go around".

"The kids here learn early on that survival always comes first - they see that if someone fights you, you fight back, harder," says Zamanjah. "They need role models, they need an alternative, and one way of doing it is to factor conflict resolution into the curriculum."

She is in the process of establishing a parents group that can help bridge the gap between home and school, as this has been identified as critical to achieving the goals of the campaign. She's also started working with the teachers.

Benjamin may still get more of that love to go around.