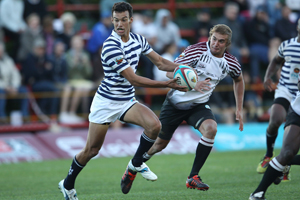 On the move: A star-turning performance from Dillyn Leyds wasn't enough to secure the Ikeys a desperately-needed win against Pukke.

UCT Ikeys snatched a draw from the jaws of victory when a late goal pinned the home team to a frustrating 29-29 draw against North-West University Pukke in the FNB Varsity Cup on Monday, 5 March.

A windy Green Mile was treated to some entertaining rugby with both sides racking up four tries (and a bonus point apiece). And as has become the norm for blustery days at UCT, teams appeared to do better playing against the wind, compelled as they are to hang on to the ball.

Case in point, UCT - wind at their backs - quickly touched down twice in the first half, but could manage 'only' a 24-5 lead by the break as Pukke weathered the early storm and, for much of the half, dominated possession and territory.

The second period saw ongoing concerted pressure from Pukke finally bear fruit when a goal narrowed the gap to 24-13. But the home team were having none of it, and Ikeys fullback Dillyn Leyds secured the bonus point when he broke from UCT's twenty-two, although a missed conversion meant the score jumped only to 29-13.

With ten minutes on the clock and 16 points separating the sides, few would have foreseen the pandemonium that was about to unfold. First, Pukke captain Joubert Engelbrecht touched down (29-21) to set up a tense final few minutes.

Then, after the final hooter, UCT lost the ball in their own twenty-two and Pukke flyhalf Gerhard Nortier inflicted maximum damage by scoring and converting a heartbreaking (for UCT) try.

But again, coach Kevin Foote was frustrated at the number of times the Ikeys were being penalised by referees for offences few others could spot.

"I can't understand what we're doing wrong," Foote said with a woeful shake of the head after the match.

The home draw leaves UCT in sixth place on the log, five behind fourth-placed Pukke and one behind Nelson Mandela Metropolitan University. Ahead looms, first, a trip to table-topping University of Stellenbosch, after which comes a home clash with third-placed University of Pretoria.

Despite the mountain the side will have to climb to stay in the competition, the Ikeys would not be giving up on a semi-final spot just yet, Foote added.

"The reality is that we won't give up until mathematically we can't," said the Ikeys mentor, "so we're going to have to see what the other results look like and take it from there."