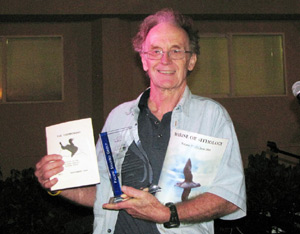 Feather in his cap: John Cooper, pictured here with a copy of the international journal, Marine Ornithology, which he founded in 1976, was awarded the PSG Lifetime Achievement Award in Oahu, Hawaii in February.

The birds weren't the only drawcard on John Cooper's recent trip to Hawaii - the retired UCT ornithologist was also there to accept a Lifetime Achievement Award from the Pacific Seabird Group (PSG).

In February, the US-based PSG honoured Cooper for his nearly four decades of study into seabirds. Cooper, now a research associate at the DST-NRF Centre of Excellence for Invasion Biology at Stellenbosch University, retired from UCT in 2008 after 35 years of research on seabird biology and conservation with the Percy FitzPatrick Institute of African Ornithology and the Animal Demography Unit.

In addition to his work on seabirds, Cooper initiated the Seabird Conservation Programme of Birdlife International, served on numerous advisory boards, and authored countless papers - starting in the 1960s - and books.