Doctors by day; musicians by night 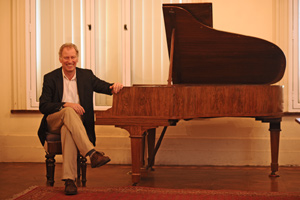 The 500 or so international health care professionals who make up the World Doctors Orchestra do it, yes, for the love of the music, but moreover, to spread the word: basic health care for all.

One of UCT's own, professor of primary health care, Steve Reid, who wowed the audience when he took to the piano during his inaugural lecture Music of Health for All in August, plays the violin in the ensemble.

Reid recently toured with a 65-strong group as part of the orchestra's first South African '˜session'. Their itinerary included a seminar, hosted by UCT and Reid, titled Musicians and Artists who are Health Professionals. During a later performance at the Baxter Theatre, they performed a piece by retired UCT professor of composition, Peter Klatzow.

Founded in 2007, the World Doctors Orchestra meets twice a year to perform a benefit concert for medical aid projects. The SA tour was in aid of the Ndlovu Care Group, a community health and development project in Elandsdoorn, Limpopo.