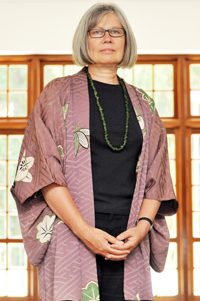 Professor Sandra Klopper took office on 1 January as UCT's most recently appointed deputy vice-chancellor. While educated at Wits University and in the UK, she's no stranger to UCT or Cape Town. Specialising in African art, she taught at UCT from 1989 to 2001, before joining Stellenbosch University for seven years. She left the Cape in 2008 when she was appointed dean of the Faculty of Humanities at the University of Pretoria. Monday Paper caught up with her briefly to ask about her new post.

MP: Selection panel-type question first - what made you decide to come to UCT?

SK: I'm not really coming to UCT; I've come back to UCT. And that is significant because, in my long academic career, I've spent more time here -12 years in all - than anywhere else. I learnt an immense amount during my time at other institutions, but I'm very happy to be back at UCT. This is where I really feel at home.

MP: You've just received a B-rating from the National Research Foundation. But you've now also taken on a senior executive position - how do you hope to balance the two 'careers'?

SK: I've been in largely administrative roles for at least six years now. But research is a lifeline for me; it's never been something I was prepared to give up. I think the temptation to just get swamped by the admin and all the other stuff that you have to do is so great that you can easily stop being a researcher. I learnt long ago that to retain my research profile, I need to do something every single day - however small or seemingly insignificant - to keep my connection to my research alive; even if it's just half an hour to read an article, or speak on the phone to a research contact. It's just something I do for myself, because I think my research feeds me. It's nurturing.

MP: There are concerns that the humanities has lost some of its prestige in recent years. Do you hope, in your role as DVC, to play some part in championing the cause of the humanities, even if it has little to do with your portfolio?

SK: The humanities are being championed now by ASSAf, and also by the minister of higher education and training, which is fantastic. But even so, I think we've got to change people's perceptions and prejudices because there is a common belief that a degree in the humanities is worthless. And that's just not true, as countless studies have shown.

MP: What's the first month back at UCT been like?

SK: It's been wonderful. My learning curve has been very steep. I keep telling people maybe it's been so steep I'll end up falling flat on my back! But it's been interesting and challenging. I'm really happy and very excited about being here.