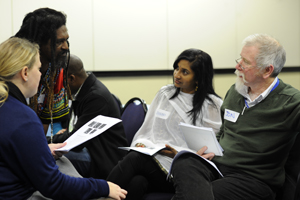 In more ways than one, Adapt is going to be a departure from its predecessors Khuluma and Mamela.

This new initiative doesn't so much start from where those two transformation programmes left off, as take the discussion in a whole new direction. If Khuluma was about talking and Mamela encouraged listening, Adapt will instead explore new ground in bringing UCT's ever-more diverse staff together.

The workshops will target "intercultural competencies as a key methodology to explore difference and otherness", according to the Transformation Services Office (TSO) synopsis.

While much good came out of those earlier initiatives, there was also a sense that they were unintentionally divisive. Some felt that this process resulted in guilt and shame rather than on unifying the UCT community, says the TSO's Khairoonisa Foflonker, who is also project officer for Adapt. The compass will now be readjusted.

"We need to speak to those intercultural competencies that would allow us to be open, flexible and honest; and willing to really listen to other people."

And while it's a foregone conclusion that race will dominate the conversation, workshops will also delve into related - "intersectional" - concerns such as gender, power dynamics, leadership, bureaucracy, and sexuality, as well as respect and tolerance for cultural, religious, political and other differences. "We're trying to add the other issues that have fallen off the agenda," says Foflonker.

Adapt, initially conceived as a leadership training course, also promises to be less abstract. Making liberal use of video clips, the programme draws on real issues and situations.

In another parting of ways from Khuluma and Mamela, which were presented by outside consultants, Adapt is a home-grown initiative for the most part. Firstly, it's run in partnership by DISCHO, under director Francois Botha, and the TSO, directed by Glenda Wildschut.

More critically, perhaps, the majority of the facilitators are UCT academic and PASS staff, some of whom have also been trained either as anti-discrimination advisors (ADAs) or as harassment advisors. Yes, it does make the programme more sustainable, but it's not designed just as a cost-saving feature, says Botha.

More importantly, these "seasoned facilitators and practitioners" understand the UCT environment and dynamics. They are also well versed in its angers and frustrations.

Three external facilitators appointed recently have been brought on board to provide a reflection of UCT's institutional culture, which will enable us to keep a check on our blind spots.

"I think that the competencies we're targeting are those leadership qualities that we would dearly like to see in our leaders," summarises Botha.

Professor Joha Louw-Potgieter has been appointed to conduct the monitoring and evaluation of the Adapt programme.