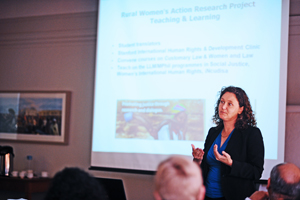 Introduced by government in 2008, the bill was withdrawn from the National Assembly last year after pressure from opponents. Its imminent reintroduction in the National Council of Provinces (NCOP) was announced in mid-December, giving rural people two months to submit their comments by 15 February.

LRG is working with the Legal Resources Centre and local community-based organisations to ensure that people living in rural villages will have an opportunity to speak out against the proposed passage of the Bill, which is considered unconstitutional by legal experts. A consultative workshop involving 100 rural delegates from different provinces came together in Johannesburg in January to discuss the bill and the way forward.

LGR has proposed that new legislation should be drafted, based on the views and needs expressed by ordinary rural people in the process of their consultation. The unit established the Rural Women's Action Research (RWAR) project to support rural communities, especially women, who live under systems of customary law and traditional governance.

RWAR has played a key role in educating rural people about the Traditional Courts Bill. It has also helped many rural communities and groups to make submissions directly to Parliament on the proposed legislation.

LRG director Associate Professor Dee Smythe said the approach taken by the RWAR project provided an opportunity to build models of practice in legislation that are inclusive and participatory.

The project is one of the recipients of the 2011 UCT Distinguished Social Responsiveness Award, established by vice-chancellor Dr Max Price to promote the university's commitment to social responsiveness.

Tabling of the bill took place on 26 January 2012 after which members of the select committee took it to their provinces for rural consultations. Once the NCOP has made amendments and a decision about the bill, it will return to the National Assembly.

Dr Sindiso Mnisi Weeks, a senior researcher in RWAR, said many rural people were not aware of the pending bill, nor were they consulted about how it would affect them.

"As the bill now stands, women in particular would be affected, because they would not be assured of their right to self-representation. Should a woman's husband die, she would not be protected against those who would want to grab her property."

Limpopo community leader Patric Mashego is one of the rural people working with the RWAR to oppose the Traditional Courts Bill.

"This bill and laws such as the Limpopo Traditional Leadership and Institutions Act destroy the dream we fought for over many years. Instead of making rural people equal citizens in a unitary South Africa, they make us subjects of chiefs who are given the coercive power to get rid of those who try to hold them to account. You may say that not all chiefs are bad. That is true, but only bad chiefs need laws like this."

Mashego said the bill would create a crisis around the issue of tribal levies.

"We are experiencing a serious problem with tribal levies and the bill will make the problem into a serious crisis if it is enacted."

Aninka Claassens, the RWAR project leader, added: "If people don't pay those levies, traditional leaders refuse to give them the proof of addresses that are necessary in applications for identity documents, pension and child grants."