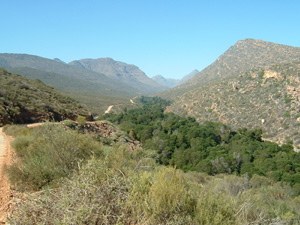 The only thing certain about the future of South Africa's ecosystems is that they are guaranteed to change.This came to light in a recent workshop titled Counting the Cost of Land Cover Change, held at the University of Pretoria and attended by a network of scientists, conservationists and policy makers known as the Land Cover Change Consortium (LCCC).

UCT held its own at the workshop. Professor William Bond of UCT's Department of Botany described dramatic changes in South Africa's vegetation that are already taking place. "In many areas woody plants are increasing, impacting on grassland ecosystems and wild and domestic grazers," he said.

Projections of future climate change and its effects are very unsure, raising challenges for conservationists and land use planners.

"Climate interacts with a multitude of other factors," said Professor Timm Hoffman of UCT's Plant Conservation Unit. "Social, political and economic factors all affect how people use land, and this will affect vegetation, biodiversity and ecosystem services."