Africa must sort its own problems, says fellow 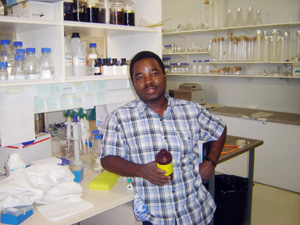 For so long, African scientists have often looked elsewhere for solutions to the continent's problems. The time has now come for that to change, believes Dr Nyasha Chin'ombe, a Claude Leon Foundation Postdoctoral Fellow, after attending the 16th International Conference on AIDS and Sexually Transmitted Infections in Africa in Addis Ababa, Ethiopia.

"We also need home-grown solutions by Africans themselves," he stressed.

At the event, Chin'ombe and Dr Michelle Skelton, both postdoctoral research fellows from the Division of Human Genetics, presented findings from their work on human genes that may make Africans susceptible to infectious diseases. Themed Own, Upscale and Sustain, the conference was organised by the Society for AIDS in Africa to promote partnership among African scientists and stakeholders from governments and civil society.

At the event, Skelton struck a partnership with a Rwandan researcher involved in treatment programmes for HIV infected adolescents. Skelton is interested in collaborating with him on the pharmacogenetic aspects of the project.