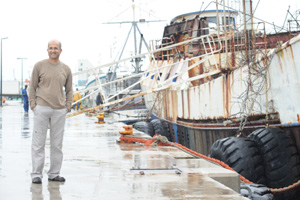 World class: Prof Mohamed Jeebhay has been named a fellow of the international Collegium Ramazzini.

UCT's Professor Mohamed Jeebhay has been elected as a fellow of the Collegium Ramazzini.

The Collegium is an international academy founded in 1982 to advance the study of occupational and environmental health issues. It comprises about 180 fellows from around the world, elected for their contributions to these fields.

Jeebhay's core research interests include occupational health services and policy development in South Africa, and the causal relationship between bioaerosols and incidences of occupational allergy and asthma. He is based in the Centre for Occupational and Environmental Health Research (COEHR) in UCT's School of Family Medicine and Public Health (SPHFM).

"This award reflects both Mohamed's international standing and the considerable international esteem in which the COEHR is held," says London, director of the SPHFM.