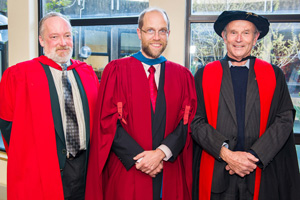 Balance of power: In his inaugural lecture, Prof Martin Wittenberg (middle) tracked the state of South African poverty and inequality via a number of surveys. In picture are Dean of Commerce, Prof Don Ross (left) and Emer Prof Francis Wilson, pro vice-chancellor for poverty and inequality. Listen to a podcast of Wittenberg's lecture.

Professor Martin Wittenberg is not one for dry data.

Quite the contrary, as Wittenberg illustrated in his inaugural lecture, Economics and Transformation: Measurement, models, maths and myths, delivered on 8 August, and as his former boss, Emeritus Professor Francis Wilson, testified immediately after. So even if Wittenberg's business - as director of UCT's DataFirst - a unit "devoted to survey research in Africa" - is data, he's been at the coalface plenty of times.

Take the point - August 1987 - at which he started his lecture. A young leader in the United Democratic Front, Wittenberg is on the lam from the security police. At the same time, however, he is doing a master's degree in local governance at what was then the University of Natal, fascinated by the "dysfunctional" apartheid state.

In Pietermaritzburg, for example, a mishmash of government types operate concurrently, and often in competition. Access to services is determined by the administrative structures in place in the particular area, and also, in black communities, by whether the local authorities are headmen and chiefs or perhaps landlords. The state and police also try and set up their own strongholds in these areas, recruiting locals who have something to gain from the existing structures.

Out of this "mess", said Wittenberg, would arise the protests that would finally help to topple the apartheid state. So forget any notions of a functioning, modern state being in place, he added.

"There were bits of it that were functioning ... but the system as a whole was a complete and utter mess. So the task in 1994 was not to transform an existing, functioning state, but to create a new state out of all these bits and pieces that were there to begin with."

Wittenberg then took a detour in 1993, by way of the Projects for Statistics on Living Standards and Development, a household survey collected under the direction of Wilson and UCT's Southern Africa Labour and Development Research Unit (SALDRU). (According to that study - and, for the purposes of his lecture, Wittenberg presented a graphic showing people arranged by size according to their income - South Africa was a very unequal state. The poor, who barely reach the waistline of the 'average' South African, are dwarfed by the super-rich, some taller than Table Mountain, or even with their heads in the clouds.)

By 2008 the picture hadn't changed much, according to the first wave of the National Income Dynamics Survey, or NIDS, conducted again by SALDRU, but led by Professor Murray Leibbrandt and Associate Professor Ingrid Woolard.

"And if you're used to thinking in terms of Gini coefficients [which measure income disparity], in some senses the 2008 picture may even be slightly more unequal than the 1993 picture," said Wittenberg.

(One oddity of such surveys, explained Wittenberg, is how often the better-off groups of society think they're just average or even poor. Even the super-rich will sometimes think about themselves as average.)

These surveys show that South Africa is a society characterised by persistent poverty (although the state's social grants have made some inroads), high levels of unemployment and continuing inequality. Anomalies in the surveys - showing, for example, an increase in unemployment over the post-apartheid era - create a problem in that those who analyse survey data, like the people in DataFirst or even Statistics South Africa, are accused of exaggerating unemployment and poverty numbers.

(Instead, the numbers and service-delivery protests would suggest that the country is once again sitting on a powder keg similar to that in Pietermaritzburg in the 1980s, cautioned Wittenberg.)

There are lots of possible explanations for the persisting pattern of inequality in South Africa, he explained. These range from inequality traps (a big unskilled group are unable to work themselves up and into a smaller skilled and well-compensated group) to a new elite that is loathe to change institutions, such as government, that allow them to feather their own nests.

Wittenberg then turned to the inaugural lecture delivered by his father (in the UCT audience) in August 1987, in which the latter, an Old Testament scholar, explained how even the kingdom of Solomon and his giant temples and fortifications were built on slave labour and inequalities. And while there were those who sang the praises of wise Solomon, Wittenberg senior had recounted, there was also resistance.

So, too, resistance may come in South Africa, noted Wittenberg.

"Today, we are not in a state of bondage, but we are certainly not yet in the Promised Land."

It is now for the country's academics to decide if they are praise singers (whether of the status quo or for a free market), or whether they will "critically reflect" and challenge those in power to change how they govern.