Of icebergs and agency - video 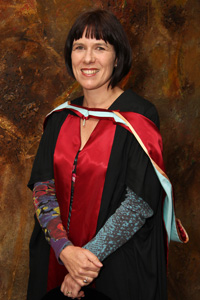 A case for change: In her inaugural lecture Prof Jenni Case spoke of how the undergraduate programme in chemical engineering will need a philosophical overhaul if success rates are to improve.

A deeper understanding of student learning.

This is what she and others are after, explained UCT's Professor Jenni Case on 1 August in her inaugural lecture, Every Generation has its Struggle: A critical realist perspective on student learning in contemporary South Africa.

Not that she hasn't picked up a trick or two over the years, said Case. She now understands, for example, that her pursuit of knowledge and understanding demands not just Aristotle's episteme (such as the study of science), but also the domains of techne (craft) and phronesis (loosely translated as ethics).

Her approach has also evolved, and she has now embraced the school of critical realism. Employing the metaphor of an iceberg, Case talked of the 'actual', ie the part of the iceberg that, say, a bunch of men in a rubber duck can see and circumnavigate (objectively observable); the 'subjective' experiences of the men in the rubber duck; and the 'real', ie the entire iceberg, including the much larger chunk of ice hidden underneath the water, the hidden mechanisms that produce what people experience subjectively and observe objectively.

For too long, researchers have either been working at the level of the actual, or - even if insightfully - only on the subjective experiences of the students. The time has come to change tack, said Case.

"If we want to start to generate insights that can help us truly understand the situation we are in, and to identify what we need to do to get to a different place, we need to go to the level of the real."

Case illustrated her lecture with the stories of two chemical-engineering students from polar opposites of the education spectrum, but who both found the degree an uphill struggle. There's Victor, a black student who came to UCT from a rural school who had to rely on his own wits in his final year of high school when teachers were either on strike or just not around; and Susan, who attended a private girls' school and was enticed into the field after a chat with a very enthusiastic chemical engineer at a careers day.

Attending courses with these and other students, attending tutorials and writing tests side by side with them, Case tried to get a full, real experience of the lives of the students. In doing so, she drew on the theories describing the interaction between structure (the world of material resources, positions and institutions, eg UCT) and agency (the world of human intention and action, eg student choices) of British sociologist Margaret Archer, a doyenne of the critical realist movement.

Case spoke of the structures that have shaped and continue to shape both Victor's and Susan's choices, such as their schooling. At UCT, the demands of their degree, which "decimate" student numbers as the programme continues, further constrain their agency or choices.

The reality, said Case, is that the observed student learning outcomes are no "matter of historical accident". As designed, the course only graduates a few who go on to very successful careers - "the role of the undergraduate programme in student development seems limited to learning to work hard and survive".

"There are a number of problems with this position, not least of which is that it takes the current outcomes of the programme for granted. Fundamentally, it plays into credentialism, which sees the value of the degree in instrumental terms focused on a piece of paper."

The scope for student growth and action in this programme is "extremely limited", Case added. And today, especially in the context of South Africa and its desire to grow its number of black graduates, change is required.

"Thus we need to envision a university programme with a significantly enlarged space for the development of student agency," said Case.

There have been positive developments in the undergraduate programme at UCT, she pointed out. This includes the recording of lectures that are then made available to students; the rollout of initiatives to build "corporate agency" among students, including peer networks; and a 'Chem Eng Bootcamp'.

But only so much academic development can be done within the current programme structure, observed Case. As a result, for the past four years she and colleagues have been conceptualising a new undergraduate curriculum, with a new first-year course scheduled to launch in 2013.

This will include a "coherent strand of project work" that will run from first to final years. More bootcamps are also lined up to help students either catch up on their work or gear up for the final examinations.

"In this way, very ambitiously, we want to allow for students to use more of the calendar year to work towards success in the programme," closed Case, "and we want to significantly increase the number of students who can complete in regulation time."

Listen to a podcast of Case's lecture.