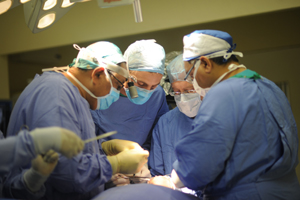 If nature abhors a vacuum, it sometimes needs a helping hand to fill the gaps.

A push - or, to be more exact, a tug - is exactly what a team made up of a UCT mechanical engineer Dr George Vicatos, his MSc student James Boonzaier and a maxillo-facial oral surgeon Dr Rushdi Hendricks offered mother nature. In a benchmarking and already award-winning piece of surgery - likely a world first - in September, they harnessed some established surgical principles and fine metalwork to rebuild a patient's entire missing palate.

But instead of tucking in a prosthetic or a bone graft, as is common, they simply coaxed the palate to seal itself.

A cleft palate is, basically, a hole in the roof of the mouth where the palate should be. It's typically formed when the body's natural structures don't fuse as they should before birth. Usually these clefts are filled by surgery soon after birth or in early childhood.

But the problem also remains common among adults. Such as when cancerous palates are removed in later life, for example.

Cleft palates visit a string of medical conditions on patients. Because there's no wall to separate the oral cavity from the nasal cavity (a condition known as velopharyngeal inadequacy), patients suffer from speech difficulties, they have to bear the indignity of food passing from the mouth into the nasal passage, and the embarrassment of nasal fluids slipping into the mouth.

Remedies in adults include the use of a prosthetic known as a palatal obturator, which is more or less a souped-up denture. Another option is the already mentioned bone graft, which involves replacing the palate with bone removed from elsewhere.

But these are, for different reasons, unsatisfying. The obturator is still messy, and the bone used in grafting doesn't allow for teeth implants, for example.

For some years, however, Hendricks and surgeons around the world have been applying a technique known as distraction osteogenesis to regenerate bone in the lower jaw.

Distraction osteogenesis was the brainchild of Russian surgeon Gavriil Ilizarov. Labouring in near anonymity behind the Iron Curtain for many decades, Ilizarov discovered that he could tease missing bone to grow using what's become known as the law of tension-stress. Simply put, if he carefully severed (or distracted) the bone and, a little tug at a time, pulled it apart, new bone and tissue would fill the gap.

"The body does the work," Hendricks explains.

But the principle only works if the membrane lining the bone, known as the periosteum, is kept intact. That periosteum contains life-giving progenitor cells. Like stem cells, these progenitor cells can direct the body to grow missing bone and tissue where needed.

Ilizarov employed his techniques and tools - a so-called Ilizarov apparatus - to restore mostly leg bones, which are easier to navigate because they're relatively straight. But since the 1980s, when word of his work spread to the west, surgeons have slowly adopted these principles to other parts of the body. (And spawned an unintended side-industry in cosmetic leg-lengthening.)

Hendricks, too, has been breaking new ground with distraction osteogenesis.

He's done so by borrowing from the design of a 'plate-guided distractor' - think of it as a train coach guided by a track - developed by American surgeon Alan Herford. The distractor, which clamps onto the broken bone via a mesh 'basket', is the coach; the 'fixation plate', a metal plate commonly used in orthopaedic surgery, is the track. A strategically placed screw allows the surgeons to move the distractor along the plate, pulling at the severed bone bit by bit.

But while Herford succeeded in growing new bone and soft tissue in the lower jaw or mandible, other surgeons could not do the same for the upper jaw or maxilla because of its peculiar anatomical constraints. Herford did, but could only work in a straight line of up to 20mm.

But now Hendricks is beginning to push that boundary to 40 mm and beyond.

That requires the plate to negotiate some tricky corners and bends, or a "curvilinear vector". The first time Hendricks tried it, he spent about three hours in surgery just bending the plates this way and that.

It became more problematic when he struck on the notion of using distraction osteogenesis to fill an entire palate in an adult. "The problem is, how do you stretch bone and tissue around a curve?" he spells out the engineering hiccup.

Hendricks approached a factory in Germany, hoping they could produce a distractor and plate that could take the helix-like 3D bends. It would not be commercially viable, they told him.

A chance meeting with Vicatos, of UCT's Department of Mechanical Engineering, changed that. Vicatos turned it into a project for Boonzaier, who designed the contraption, now patented under UCT. (Boonzaier's involvement was funded by the Medical Research Council.)

The design has now eared Vicatos and the team the title of South Africa's Inventor of the Year, named so by sci-tech magazine Popular Mechanics.

"In the end, it is such a simple thing," says Vicatos of the gadget.

In September, Hendricks implanted the first design into a 37-year-old patient. (A UCT team was there to record the event.) With Vicatos, Boonzaier and dentist Dr Yusuf Parker on-hand, Hendricks severed bone - which would act as the "transport disk" - at the back of the jaw, but keeping the surrounding network of nerves and blood vessels intact, essential for growth. He then fixed the distractor, and screwed the track elsewhere around the jaw.

Other than the apparatus itself, Hendricks had a post-operation trick up his sleeves as well. While distraction - pulling on the transport disk - is usually done at a rate of 1mm a day in adults and 2mm in children, he'd decided on 1.5mm per day in his patient. That, he explains, would allow for the growth of both soft and hard bone and tissue that make up the palate.

By day six after the surgery, 9mm of the patient's palate and surrounding bone had been regenerated. Once the entire palate had been filled, which took about a month, the palate was allowed to settle for three months, after which the contraption will be removed. Finally, teeth will be implanted into the new bone.

"It's more fantastic than I could have imagined," said a clearly impressed Boonzaier when he first saw the new palate forming in the patient's mouth.

A month or so later, the team upped the ante. They filled a gap of an unheard of 80mm in a second patient who'd had a tumour removed from her mouth two years ago. That involved a few ergonomic modifications on the device to fit the demands of the patient's missing palate, and replacing three-quarters of the upper jaw.

To date, three weeks after this second operation, more than half of the palate has been formed, which includes palatal and alveolar bones, nerves, blood vessels and other soft tissue structures, reported Vicatos in mid-December. "So we haven't just stopped working on the device after the first operation - we're continuously improving it."

The device is not going to be a luxury item only, the team promises. While they're still costing the entire exercise, they're confident that both the surgery and the gadget will suit the pockets of both medical schemes and state hospitals.

And they'll make sure the gadget will be produced by a local company.

Which suggests that South Africa could soon be the talk of the maxillo-facial surgery world.