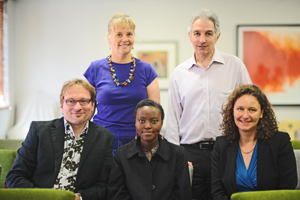 The work of the Southern Africa Food Lab (SAFL) and the Rural Women's Action Research Project (RWAR) are a good match for UCT's social responsiveness objectives, both in letter and spirit.

Their research not only tackled two critical and complex social issues - food insecurity and the effects of customary law and the Traditional Courts Bill on women in rural South Africa, respectively - but also did so with energy and sensitivity, and offered solutions, to boot.

This work has won the SAFL and the RWAR this year's Distinguished Social Responsiveness Awards, valued at R30 000 each. The award was established by vice-chancellor Dr Max Price to promote the university's commitment to social responsiveness as an important institutional activity, and is open to staff whose activities benefit not only UCT, but also an external community.

At the launch of the latest Social Responsiveness Report on 18 November, Associate Professor Ralph Hamann, SAFL co-founder and chair of its steering committee, discussed how his team pulled together key role-players in the food sector, including farmers, retailers, manufacturers, activists, academics and consumers - some who don't always see eye to eye.

"The big part of the food insecurity problem is that everyone has different perceptions of what the problem is and of what the underlying causes are," Hamann, research director at UCT's Graduate School of Business, explains.

So part of the SAFL's activities included joint visits to different sites along various food value chains, from production to distributions, allowing participants to get a first-hand sense of different parts of the system.

The purpose was to create a platform to exchange ideas, better understand perceptions, and identify innovations that could have ripple effects on the "wicked problem" of food insecurity.

Hamann described the project as an illustration of the role that universities can play as a "boundary organisation", acting as knowledge broker, convener, translator and facilitator.

The project builds partnerships with rural community based organisations, non-governmental organisations and other academics to investigate issues of concern to rural women in Msinga in KwaZulu-Natal, Keiskammahoek in the Eastern Cape, and in Elim in Limpopo - areas with different cultures, histories and institutional arrangements. The project focuses on issues of land rights, power relations and accountability.

One of the problems that has come to light through rural consultation meetings is the resurgence of traditional levies demanded from poor people, says Aninka Claassens, RWAR project leader.

"If people don't pay those levies, traditional leaders refuse to give them proof of addresses that are necessary in applications for identity documents, pension and child grants," Claassens explains.

According to Dr Sindiso Mnisi Weeks, a senior researcher in the RWAR, the project found that many ordinary rural people were unaware of the pending Traditional Courts Bill that had been drawn up in consultation with traditional leaders, but without any consultation with those it affects.

The bill centralises power to traditional leaders, enabling them to unilaterally make and apply customary law at their whim. It also does not assure women of self-representation, and thus does not adequately protect women against property grabbing should their husbands die.

Together with others, the team mobilised stakeholders and lobbied against the passing of the bill in its current state, resulting in its withdrawal to allow more time for consultation in 2012.

The project's approach, adds Smythe, provided an opportunity to build models of practice that are inclusive and participatory.