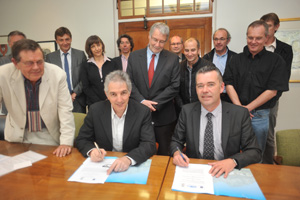 In agreement: UCT vice-chancellor Dr Max Price (left) and Dr Pascal Olivard, president of the UBO, formalise an agreement between the two institutions; far left is UCT's Prof John Field, who has been involved in an ongoing research partnership with the UBO.

With this in mind, UCT's Marine Research (MA-RE) Institute signed an exchange agreement with the University of Brest (UBO), one of France's leading marine research universities, and the French Research Institute for Development (IRD) in November. The agreement, explains MA-RE director, Professor John Field, covers research collaboration, the exchange of postgraduate students, and the running of joint marine master's and PhD degrees.

The five-year agreement formalises a partnership that has been running for the past 15 years. During this time, students and staff moved between the institutions to contribute to oceanographic and maritime research.

The agreement forms part of the venture known as the International Centre for Education, Marine and Atmospheric Sciences over Africa (ICEMASA). ICEMASA brings together scientists, academics, engineers and technicians from UCT and various universities and research institutes in France to boost activities in marine research and environmental conservation.

Dr Francis Marsac, IRD visiting scientist in UCT's Department of Oceanography, expressed his pleasure at the agreement, saying it was an opportunity to develop new ways to tackle issues such as the effects of climate change.

"When people from across continents work together, they do more interesting things," he says.