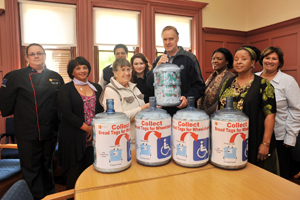 These thousands of tags had been collected from the university's residences.

And on 14 November, Mary Honeybun, founder and co-ordinator of the aid organisation, gratefully received the tags from representatives of UCT and Fedics.

Bread Tags for Wheelchairs collects the tags and sells them to packaging producer Groplast, which transforms them into seedling trays and photo frames. The proceeds are used to buy wheelchairs that the charity donates to disabled children and adults recommended by the Disabled Persons Associations.

Approximately 200kg of plastic tags are required to finance one wheelchair. Since its launch five years ago, Honeybun and co have been able to distribute 167 wheelchairs.

Cecilia de Villiers, senior co-ordinator of catering services at UCT, Tracy Van Zyl, project manager at Fedics, and Maureen Stringer, also of Fedics, were the masterminds of the project at UCT.

The group was determined to collect more tags next year.

"We're starting immediately with the next drive," said de Villiers declared. "Next time we're going to have 12 bottles."