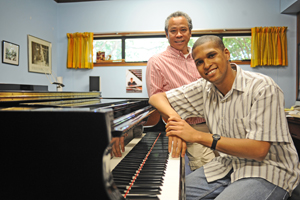 The 19-year-old classical pianist from Elsies River in Cape Town dazzled judges with his rendition of the Allegro con brio from Ludwig van Beethoven's Piano Concerto Number 2 in B-flat major, Op 19, which Beethoven had composed when he was between 17 and 19 years old.

Wagenstroom's performance of the piece, with the Cape Philharmonic Orchestra, was good enough to steal top spot from five other finalists.

Wagenstroom's mentor, Associate Professor Franklin Larey, says his protÃ©gÃ© is "a joy to work with".

"He is enormously talented and, at his young age, his playing already reveals a deep maturity and remarkable musical insights," says Larey.

It is high praise indeed from a musician of Larey's repute, who heads the keyboard studies section of UCT's South African College of Music.

Wagenstroom's talents were recognised from an early age - he's won numerous prizes and scholarships, including one to attend the Adamant Music School in Vermont, US. He has been attending the school's Traditional Summer Session that runs from mid-July to early August for the past three years.

Apart from being invited to give a recital at the Hilton College earlier this year, Wagenstroom has also been asked to perform at the Mauritius Opera in 2012.