Christmas in a box 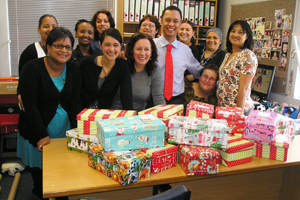 Christmas came early for underprivileged children when staff from the faculty office in UCT's Faculty of Health Sciences joined forces to collect gifts, which will be distributed over the next few weeks.

The goodwill was inspired by the national Kidz2Kidz Santa Shoebox Project. As specified, the gifts were wrapped in large shoeboxes, and included a set of new clothes, toys, educational supplies and toiletries.

Kidz2Kidz co-ordinates the donation, collection and distribution of personalised gifts to underprivileged children, and helps parents to teach their children the importance of giving. Participating is described as "a profound, valuable and personal experience", as the donor knows the name, age and gender of the child that they choose to donate to, and the name of the organisation that cares for the child.

The idea was so warmly embraced that some of the 13 staffers got their families involved. And the Christmas cheer won't stop there.

"We felt so inspired by this that we have decided to participate in the Angel Hugs project in early December, in which people contribute a bag of groceries for poor pensioners," explains Winkler.

The Office of the Vice-Chancellor also joined the shoebox initiative, filling eight boxes of cheer in October.