Prince of Wales speaks on the global and the local 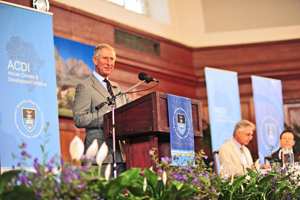 The birth of the world's seven-billionth resident, marked symbolically on 31 October, offered a timely backdrop to the talk by the Prince of Wales at UCT earlier today, 5 November.

Prince Charles was addressing a packed Jameson Hall '“ the same venue where is mounted a portrait of his great uncle who, as Prince Edward, in 1918 became UCT's first Chancellor; and where his grandmother, then known as Queen Elizabeth, received an honorary doctorate in 1947. But his talk was of another brimful location '“ Earth.

There is tension springing from the competing demands on the land, the Prince of Wales said. And that cranked-up demand comes with consequences.

"What with the ever-growing need for more urban development and the pressure to produce more food, it is fast becoming difficult to maintain those essential services, such as the supply of clean water and, ultimately, to protect those areas that are rich in the diversity of life and which, whether we like it or not, are actually vital if nature is to continue sustaining herself and, therefore, us."

But these concerns have local repercussions. The Prince turned, therefore, to the needs of rural farmers and local fisheries.

Both are under pressure, he explained. Farming families, ironically, are growing hungry, and many fisheries are overexploited or close to collapse.

These resources have to be properly governed and planned, with an eye on environmental sustainability, he urged. And international investment '“ deals for some 56 million hectares of land, much in Sub-Saharan Africa, were announced in 2009 '“ has to be closely monitored.

"It seems to be absolutely essential, though, that such an investment is mindful of its impact on local communities and natural systems," the Prince of Wales said.

As has become a trademark, Prince Charles championed the cause of smallholders; specifically, in this case, those of Africa.

"I do not see small farmers as backward relics of the past," he said. "In fact, I see them as an utterly crucial cornerstone of the future, just as they are becoming in other parts of the world."

Not only can such smallholders secure the livelihoods of millions, but their traditional agricultural techniques can also offer an alternative to an agriculture that is dependent on fossil fuels.

"Sustainable, agro-ecological approaches are the ones that could produce the sorts of diverse foods that Africa needs. It is these techniques that will prove resilient in the face of the challenging economic and environmental problems we all now face."

Policies today must address the concerns of food security, poverty and climate change, Prince Charles concluded. This is essential to build properly resilient economic systems '“ "green economies, if you will".

Read the text of the full speech.