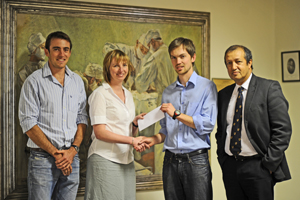 Two final-year UCT medical students won a prestigious award for best original presentation at the South African Transplant Society's recent annual national conference -this for their investigation of the relationship between kidney function in the first few days after transplantation and the long-term outcome of transplanted kidneys.

Daniel Nel and Jonathan Vogel claimed top honours from among a host of established medical researchers and surgeons, an unusual feat for final-year medical students. And this research was done, Nel explained, in their "free time", as it forms no part of their curriculum.

Conference organizer Dr Elma Steyn said that to her knowledge it was the first time that students had ever won this award.

"Just to get a paper accepted is an honour, but to win best presentation is quite a big deal for us," said Nel. "We chose to do it in our free time as we're passionate about surgery and research. It was a lot of extra work, but worth it."

Their research will be submitted to an international journal for publication.

The duo looked at all the adult patients who had received renal transplants at Groote Schuur Hospital (GSH) over a five-year period.

They found that an increased 'cold ischemic time', the time taken between removing the kidney from the donor and implanting it into the recipient, was a significant risk factor for poor early kidney function. Their recommendation is that transplant surgeons reduce this time as far as possible.

"Our most important finding, however, is that slow/average kidney function is almost as bad as poor early function, and these two should be grouped together," said Nel.

They found that patients with poor early kidney function stay in hospital longer and also have a poorer long-term outcome; in other words, their kidneys don't work as well one year after the transplant.

Kidney transplantation has been much in the news, with UCT's Dr Elmi Muller pioneering the transplantation of kidneys from HIV-positive to HIV-positive patients at Groote Schuur Hospital, for which she won a heath care-givers category prize in the Shoprite Checkers Women of the Year 2011 awards.

"We are privileged to have been able to do our research at the GSH renal transplant unit, which is a leading transplant centre in South Africa and the African continent," Nel added.

Both Nel and Vogel plan to specialise in surgery. Nel is interested in general surgery, transplantation and cardiothoracic surgery; and Vogel in orthopaedics and urology.

Medicine is in Nel's blood; his grandfather emigrated from the Netherlands and worked in the rural Transkei as a mission doctor for almost 40 years. He also has an uncle working in Malawi as a mission doctor and another is an orthopaedic surgeon. He's "very involved" in the UCT Surgical Society (in 2010 he founded the society's research portfolio, and this year he's president). Next year he starts a two-year internship in East London.

Vogel, who also found time to complete his first Absa Cape Epic mountain bike stage race this year, hails from a small town in the Eastern Cape and will also do his internship in East London.