Vice-chancellor Dr Max Price honoured four new UCT Fellows on 18 October, two of them from the Department of Mathematics and Applied Mathematics. Professors George Janelidze and Hans-Peter Kunzi (the maths professors), Vanessa Watson of the City and Regional Planning Programme in the School of Architecture, Planning and Geomatics, and Ed Rybicki of the Department of Molecular and Cell Biology were welcomed as new Fellows. The UCT College of Fellows also named three recipients of its annual Young Researcher Awards for 2011. They are Drs Rob Ingle, Deena Pillay and Thomas Scriba. Young Researcher Awards are offered annually in recognition of outstanding scholarly work by young academics. 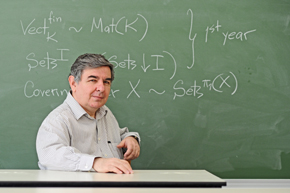 Professor George Janelidze obtained his PhD in Mathematics from the Tbilisi State University in Georgia in 1978, and his DSc from the St Petersburg State University in Russia in 1992. His was, in fact, the first DSc in category theory in the former USSR. During the years thereafter, he was a visiting professor at a number of institutions in Europe, North America, and Australia, where he collaborated with several distinguished mathematicians. He was appointed as professor at UCT in 2004, and became an honorary member of the A Razmadze Mathematical Institute of the Georgian Academy of Science, where he had previously held a permanent position as leading research scientist. Janelidze has about 80 publications in international mathematical journals, and he is the editor of four such journals. He has been a National Research Foundation (NRF) A-rated researcher since 2005. Janelidze's current research is devoted to various topics of categorical algebra, including abstract Galois theory, with applications in classical algebra, geometry and topology. "Being a Fellow of a university is always an honour, but to be a Fellow of UCT is a very special honour," he told Monday Paper. 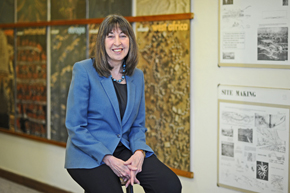 Professor Vanessa Watson joined the Urban Problems Research Unit at UCT in 1980, and was a researcher ? and, ultimately, director ? there until 1996. She has held a teaching position since 1989, at full professorial level since 2002. She has a PhD from Wits and holds a B-rating from the NRF. She was the winner of the Department of Science & Technology Distinguished Women in Science award in 2003, the Venter/Alton Literary Award in 2005, and the South African Planning Institute national book prize in 2010. She was elected to the South African Academy of Science in 2006. Watson's research over the past couple of decades has aimed to change the way in which planners and other urban professionals think about the future of cities in the global South, and in Africa more specifically. "It has involved an interrogation and critique of mainstream planning approaches, almost entirely transplanted from Euro-American origins, and a consideration (in theory) of how the realities of rapid urban growth, informality, inequality and environmental threat demand changed perspectives and conceptual resources," she told Monday Paper. 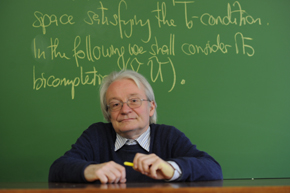 Professor Hans-Peter Kunzi received his master's, PhD and habilitation degrees from the University of Berne in Switzerland. After postdoctoral years at Virginia Tech, US, and UCT, he worked for several years as a lecturer and researcher in Switzerland, at the Universities of Berne and Fribourg. In July 2000 he was appointed full professor at UCT. He has held an NRF A-rating since 2006. The research of his Topology Research Group at UCT lies mainly in the field of analytic and categorical topology, focusing on frame theory and asymmetric topology. For the past 30 years Kunzi has travelled a great deal for scientific purposes, leading to numerous collaborations and publications with colleagues all over the world. In particular he regularly visited Spanish universities, and has spent many months in the region of Valencia in the past years. "I am very happy to receive this award from UCT in recognition of my work in the last 30 years as a scientist and teacher. I hope that I shall be able to continue this work at UCT for many years still." 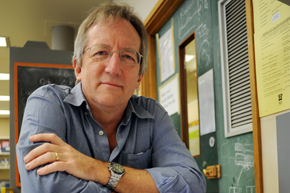 Professor Ed Rybicki has been at UCT, as a student and staff member, continuously since 1974 - and in the same office since his appointment as a lecturer in virology in 1981. He became a senior lecturer in 1987, an associate professor in 1992, and was promoted to professor in microbiology in 2002. He started out as a classical plant virologist, but retrained in molecular biology techniques in 1985 during an academic leave in Belgium. His research interests are in the area of 'biopharming', or the use of plants and cell cultures to make pharmaceutically-important proteins and other molecules, and in elucidating the virus-host interactions of grass- and cereal-infecting geminiviruses with a view to engineering resistance against them. He is a fellow of the Royal Society of South Africa and an elected member of the Academy of Science of South Africa. "I regard my election as a fellow of UCT as a very welcome vindication of my professional and private service to this university, and I am honoured that the fellowship has seen fit to include me."