Best gift would be to pursue her vision 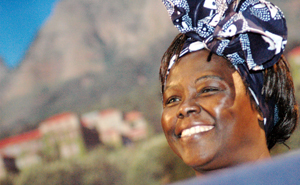 In honour: All Africa House hosted a tribute function in honour of the late Wangari Maathai, seen here delivering a VC's Open Lecture at UCT in 2005.

Academics and students paid touching tribute to the late Professor Wangari Maathai at a memorial function hosted by All Africa House on 20 October.

Maathai, who died on 25 September this year, was the first woman from East and Central Africa to earn a PhD. The Kenyan academic and political activist was remembered as an uncompromising fighter for justice. Her efforts won her widespread acclaim among the grassroots of African society and notoriety with the Kenyan authorities, with former president Daniel arap Moi having her arrested on several occasions. 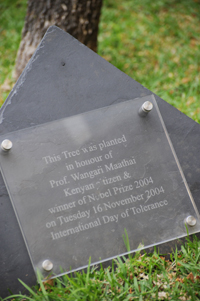 Her status as a champion of peace and justice was chiselled into history when she was awarded the Nobel Peace Prize in 2004. Maathai was praised for founding the Green Belt Movement, a grassroots environmentalist group that thus far has planted more than 45 million trees around the world (which she touched on when she delivered a Vice-Chancellor's Open Lecture at UCT in 2005).

Perhaps as importantly, acting deputy vice-chancellor Professor Nan Yeld noted at the tribute, the Green Belt Movement was revolutionary in that it demonstrated for the first time that the green movement could be used to empower the poor, especially rural women, and was not the sole preserve of wealthy, developed nations. But, as one speaker observed, the best tribute to Maathai would be for those left behind to pursue her vision.

Rezandt announced plans by All Africa House to install a plaque next to the tree planted at the residence in 2004 to mark Maathai's Nobel Prize.