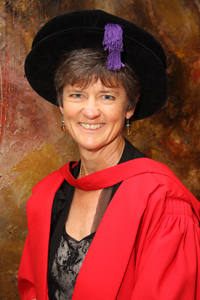 As her topic, Evo-Devo: Clues to morphological and functional diversity in bats and resurrection plants, indicates, Professor Nicola Illing had some educating to do in her inaugural lecture on 19 October.

Evo-Devo, noted Illing from her on-going work with a team of UCT students and collaborators from abroad, is a term coined in the 1990s to explain the evolution of morphology in living organisms through the eyes of developmental genetics.

Bat wings, with their extra-long fingers linked by a membrane are a good example of such variation, highlighted by Darwin 150 years ago when pondering the question of the evolution of limb diversity in vertebrates. Unlike in human hands, where webbing between fingers regresses during embryonic development to free fingers, bat wings retain the inter-digital webbing between the digits. Illing and her research group have shown that expression of Sonic hedgehog, a gene which is known to be important for patterning hands and feet of all vertebrates, is uniquely reactivated for a second time during bat wing development.

In the 1970s, she said, the accepted model was that gene duplication was a prerequisite for a change in gene function. But more recently, it has been revealed that changes in regulatory elements that turn the genes on or off during the development may also play an important role in generating functional diversity.

"We've shown that the reactivation of the Sonic hedgehog signalling loop is important in extending the outgrowth of bones and retention of the inter-digital membrane in the bat wing," Illing said.

Turning to plants, Illing noted that the "cool" Evo-Devo question was whether the desiccation tolerance in leaves and roots of a specialist group of plants known as resurrection plants, evolved from the activation of seed desiccation genes. Desiccation tolerance refers to the ability of an organism to withstand or endure extreme dryness, or drought-like conditions. In plants, it could mean species that revive after seeming to be dead.

After studying Xerophyta humilis, a plant whose family members are widespread in southern Africa, Illing and her research group have highlighted the importance of the central regulators of germinating seed in the desiccation response of leaves in resurrection plants.

"What we have seen is the reaction of existing genes regulatory pathways that play an important role in generating diversity."

But why these findings are important to humans?

Much of our current insight into how genes are regulated during development has been obtained from researchers working on human diseases. Illing noted that the study of the genetic basis of morphological diversity in bats and plants provides alternative invaluable insights on how this occurs.

"Our lessons on the genetic basis of diversity of morphology have taught us about development in the limb and the importance of Sonic hedgehog in stimulating bone growth and preventing regression of inter-digital membranes by cell death. This is important, because cancer arises when the processes of growth and cell death go wrong. We need to follow up these leads in future research."