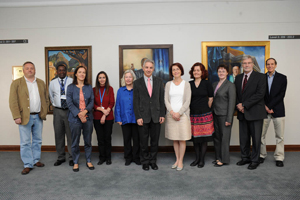 Possible collaborations between UCT and Finnish researchers received another boost when representatives from the Academy of Finland visited the country - and UCT - early in October. Fresh from signing a Memorandum of Understanding with its South Africa counterpart, the National Research Foundation, on 4 October, the four-member delegation from the academy, a leading source of competitive research funding in Finland, made a brief stop at UCT. They met with the vice-chancellor, Dr Max Price, and other senior members of the university management, including deputy vice-chancellor of research, Professor Danie Visser. The Finnish delegation was particularly interested to discuss areas in which there are existing Finnish research connections, such as learning and education, law, computing, biomedicine, and food and environmental research. 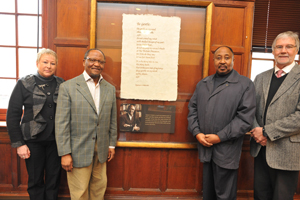 Be Gentle is a short poem, just 16 lines. But students weighed down by the demands of academia can find plenty of inspiration from it when they visit UCT's Postgraduate Centre and Funding Office. The poem by former vice-chancellor Professor Njabulo S Ndebele, first published 40 years back in 1971, has been transcribed, framed and mounted in the centre. It's an unusual choice, but, presented with money to purchase a piece of art for the centre, Ndebele's verse seemed ideal. "We wanted something relevant to both South Africa and UCT," explains Linda Vranas, the centre's director. Ndebele (second from left) was on hand when the work was unveiled, as were (from left) Vranas and deputy vice-chancellors Prof Thandabantu Nhlapo and Prof Danie Visser. 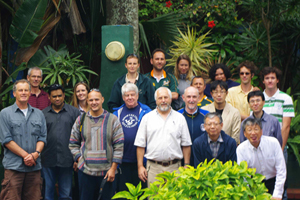 Prof John Bolton of UCT's Department of Botany is co-leading a South Africa/Japan project that links scientists from the two countries for a study of the evolution of marine algae. Titled Biodiversity and Evolution of Algae in the Indo-Pacific: A Japan/South Africa comparison, the project is funded by South Africa's National Research Foundation and the Japan Science and Technology Agency, and will study both microscopic algae (phytoplankton) and large algae (seaweeds). The project will involve a series of collecting trips, workshops and conferences in the two countries over the next three years. The first workshop and field trip was held in KwaZulu-Natal recently. It was attended by representatives from UCT, Wits University, the Universities of Hokkaido, Ryukyus and Niigata, and the South African Department of Agriculture, Fisheries and Forestry, as well as guests from scientific institutions in KwaZulu-Natal. 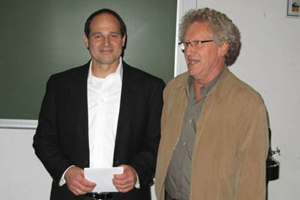 Prof Leonard Barbour, a graduate from UCT's Faculty of Science, delivered the faculty's Distinguished Alumni Lecture in September, taking alumni, staff and students on a whirlwind tour of crystals and crystallography. His talk, titled The Secret Life of Crystals, covered the gamut of crystallography, from the ancient Romans' take on crystals (it's ice), the discovery of the hexagonal symmetry of snowflake crystals in the 17th century and the use of X-rays to identify crystals' atoms and molecules in the early 20th century, to the work of the Nobel-winning scientists in the field. Barbour (left in picture, with UCT's Prof Allen Rodgers) is an A-rated scientist and holds a national research chair in chemistry at Stellenbosch University.