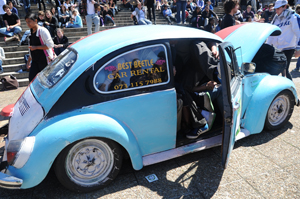 Baby you can drive my car: UCT students pile into a VC Beetle, demonstrating the importance of car pooling - and doing their best to limit their carbon footprint.

Carbon emissions trading across international borders has been a messy, contentious business, not least because not all countries care for the idea.

But as Anthony Dane (a master's student in economics at UCT) found in a recent project, it works better when everyone's on board and keen to cut their emissions. Dane and his supervisor, Dr Martine Visser, recruited 60 students - 56 stayed on until the end - for a five-week exercise in personal carbon trading, specifically for carbon dioxide emitted during transport, be it by car, bus, carpooling, mini-bus, train, bicycle or other.

The students had to provide individual baseline emission numbers after the first week, and then commit to cutting their emissions over the following four. When they couldn't, they had to pay a penalty, a mutually agreed-on R3.39 per kg carbon dioxide equivalent, or kgCO2e, a measure of how much global warming a kilogram of the greenhouse gas might cause.

Or, alternatively, they could buy carbon credits, cheaper, from those who did manage to reduce their emissions. In trading, that price averaged out at around 40c per kgCO2e, Dane reports. In many ways, the exercise reflected what happens internationally, he says.

There was one dramatic departure from the international picture, however, for which critics of carbon trading have pointed out that, overall, emissions are not being reduced. In contrast, the students in Dane's project cut their emissions by 34% in total, or 1 870gCO2e.

That, he calculated, works out to three round trips, by car, between Cape Town and Johannesburg.

"Where it differs from what happens internationally," he says of the project, "is that there was buy-in from everyone, in that the participants wanted to take part, and they were all committed to reducing their emissions."