Schools Development Unit - a decade on 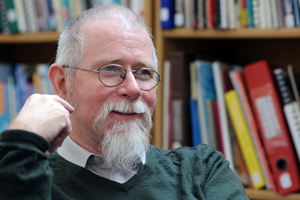 Then and now - Dr Jonathan Clark, director of the Schools Development Unit.

The Schools Development Unit (SDU) had their extended '10th birthday' celebrations in September (although they're really 11 this year).

Established formally in 2000, the unit's objective was to build on the pioneering work done by groups such as the Teaching and Learning Resources Centre, the Mathematics Education Project and the Life Skills Project, initiatives fostered by UCT in the 1980s to "effect transformation in South African schools". These projects would take on new life and shapes in the SDU.

The SDU is an integral part of the School of Education, concerned directly with professional engagement, explains director Dr Jonathan Clark - its basic aim is to develop quality teaching and learning in the fields of mathematics, the sciences, literacy and life skills. A major area of involvement is in teacher professional development, with formal qualifications playing a big role - the unit presently offers a range of university-certified Advanced Certificates in Education (ACE) programmes. In addition to on-campus tuition, teachers participating in the ACE programmes are provided with school-based support to assist them in "translating the learnings of the lecture theatre into their own classrooms", says Clark.

The SDU also offers a small, but growing number of university-certified short courses that are tailored to meet the subject-specific needs of practising teachers. Producing quality teaching and learning materials has also been a key component of the unit's work.

Over the years the SDU has been involved in a range of school-based projects in primary and secondary schools across the province. The recently completed Rural Education Project (REP) worked with foundation and intermediate phase teachers in 38 rural primary schools. Closer to home, the Mathematics and Science Education Project (MSEP) is an ongoing project that operates intensively in five local secondary schools.

"While all these interventions have been underpinned by a belief that building teacher efficacy lies at the heart of professional engagement, the need to engage in broader curriculum and whole-school development work is factored in to all project design and implementation," says Clark.

The SDU has also developed strong links with the Western Cape Education Department (WCED), and aims to work in close co-operation with departmental officials.

For the past few years the SDU has been the service provider responsible for the administering, marking and analysis of the annual grade 3 and 6 numeracy and literacy tests conducted in all primary schools in the Western Cape.

In 2011, the unit also took the reins of 100-UP, a three-year project born out of the Vice-Chancellor's Strategic Fund. Under 100-UP, the SDU will provide academic and life skills support to 100 academically strong Grade 10 learners drawn from all 20 secondary schools in Khayelitsha, with the expectation that, come 2014, these students will be prepared for and qualify for a place at UCT.

We spoke with director Dr Jonathan Clark on the origins of the SDU, its mission and what keeps the unit motivated.

Monday Paper: Someone mentioned at the SDU's anniversary event that the Unit had to change gear - politically - after 1994; before then, the unit - in its previous incarnations - was almost in conflict with the policies of the previous regime, while post-1994 it set out to support the new education policies that were obviously more inclusive. Is this still how the SDU sees itself and its role?
Jonathan Clark: Bearing in mind that the SDU was only constituted in 2000, it's difficult for me to comment about what happened before then, but I think it is fair to say that the organisations (MEP and TLRC) out of which the unit was formed would of course have adopted a broadly oppositional stance to the apartheid state and its educational policies. Since then, things have certainly become a lot more complicated, although I would argue that the unit has always sought to maintain a crucial distance from the state, which allows it the space to engage critically with whatever educational policy is in the offing. This is certainly the case when it comes to issues of curriculum, which are always, in my opinion, quite contentious, and in need of rigorous and honest debate.

MP: You've hosted a number of events lately concentrating on reading literacy; is this just a coincidence, or were you working towards a theme over recent weeks?
JC: The focus on literacy is deliberate, for low levels of reading and writing have a profound impact on learning in all subjects. Learners (and teachers) need to understand the content of the subject as well as how to do the subject and, of course, all of this happens through language. Matters are further complicated because in most classrooms, English - the language of learning and teaching (LoLT) - is not the home language of either the teacher or the learners. So, in addition to having to cope with the demands of second-language teaching and learning, the specific discourses of the content subjects have to be dealt with. No easy task for hard-pressed teachers, but fertile ground for meaningful and constructive professional engagement.

MP: The unit focuses on teacher development; have recent projects like 100-UP, which concentrates on learner development, provided any new insights or called on different skills and approaches?
JC: Yes, it's certainly true that teacher professional development lies at the heart of the unit's work, but such a focus doesn't preclude more direct engagements with learners who are trapped in schools that are struggling to break out of the cycle of underachievement and failure. 100-UP is a case in point, and what is particularly exciting about this programme is that it encourages us to reach out to the broader university community - over the next couple of years we'll be working in collaboration with colleagues from other faculties, and in partnership with student organisations. More broadly, it offers hope - for there are secondary schools in the township from which the 100-UP learners are drawn that have never had a matriculant gain entrance to UCT. It's a clear signal, then, of our intention to reach out to township communities such as Khayelitsha.

MP: Results from the Annual National Assessment must have been worrying and disheartening. What keeps the SDU motivated?
JC: They are a reminder of just how much work there is still to do! It may be a source of continual discomfort, but there's no escaping our past and I think we have come to accept just how much we are burdened with the collateral damage of apartheid education - 'failing schools, in a fragile system', as I like to put it. Even here in the Western Cape, the educational opportunities afforded to those attending middle-class schools in our leafy suburbs are a world apart from those available to the children of the urban poor on the Cape Flats. So in essence it's an issue of social justice, and that's motivation enough.

MP: Your website includes the following comment: "The SDU changes schools for good." What would you consider the unit's finest achievements over your tenure?
JC: When it comes to formal professional development activities, a large number of teachers (more than 300) have successfully completed one of our ACE programmes over the past two years; and we've also initiated, and grown, a substantial short-courses programme. Our ongoing involvement in the province's programme of grade 3 and 6 systemic testing is something we can also be most proud of - it's a huge operation, administering, marking and processing tests of learners in the over 1 000 primary schools across the province. That we have been able to continue our work at both the primary and secondary levels of schooling (and going forward, at the interface of the two), focusing where it matters most - at helping teachers at the chalkface - is, of course, the point of it all. There are many strings to the SDU bow...