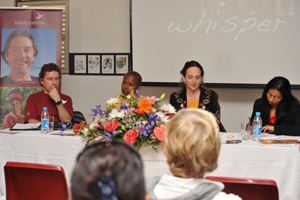 HIV activism: Derrick Fine of The Openly Positive Trust, student Phindile Sithole-Spong, Cal Volks and Lucina Reddy, both of HAICU, at the 5th Colloquium on HIV/AIDS.

Titled Narrative and Nostalgia in HIV Education and Research, the gathering focused on the human stories behind the virus. The aim was to encourage the university to develop "a social context in which social identities may be renegotiated in order to promote acceptance and tolerance", according to Cal Volks, director of UCT's HIV/AIDS Institutional Co-ordination Unit (HAICU), which hosted the event.

Introducing the topic, Volks said HIV self- and enacted-stigmatisation may still deter students from publicly disclosing their HIV status. There is a need, she added, to discuss ways of educating the university to understand the complexities of living with HIV.

Phindile Sithole-Spong, who last year publicly disclosed her HIV-positive status to the UCT community, was on hand to provide a personal account of such an experience. She said there had been pros and cons to publicly disclosing her status. The positives are that she has become independent, strong, and able to redefine herself.

The downside is that sometimes people might not look beyond her HIV status to appreciate the fullness of who and what she is. "Some people fail to see me as Phindile, as a human being."

Professor Relebohile Moletsane of the University of KwaZulu-Natal noted that there had been a resurgence of the concept of "our culture". She argued that the effects of cultural nostalgia are perpetuating gender inequality and gender-based violence, and inhibiting HIV prevention efforts.

Virginity testing is a case in point, Moletsane argued, seen as a form of controlling young women's bodies instead of educating and empowering women to make healthy choices and seek help when unable to sustain these choices. "We need to use the past as a critical space to inform what we can do better in the future."