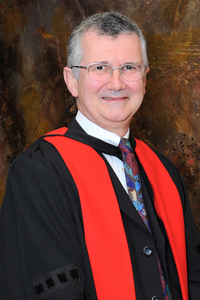 Local is global: Prof Nigel Worden's interest in slave history has opened his eyes to the Cape's ties to other regions of the world.

While not without its troubles - Irish republicanism, the rise of Russian communism, the first hints of uprising in India, a world war - George V's rule of the British Empire from 1910 to 1936 would, on the face of it, have come too late to have much to do with slavery as it's traditionally understood. Even less, then, with slavery in the early Cape colony.

But even if it's not that straightforward, there is in fact a connection, as explained by Professor Nigel Worden in his inaugural lecture, The Global Cape: Breaking the boundaries of the early Cape colony, which he delivered on 21 September. It's all about the study and origins of history as a academic discipline, argued Worden, who since 2009 has held UCT's King George V Chair of History. (He was first promoted to full professor in 1997, but had never delivered an inaugural lecture.)

History, as an academic discipline, was really only developed in the mid- to late-19th century, most notably in the German state of the period, Worden explained. "Just at a time when nationalism was at its fore."

History as a subject would underpin that nationalist impulse, he said, its purpose to build up a nation's historical credentials.

"The subject of history was seen as being a necessary part of the construction of a nation state. It was important that a nation state has its own archives, its own collection of documentary material, which are by definition the product of a government of a particular nation."

That rule of thumb would also apply, no less so, to the British Empire.

So, then, the establishment of the King George V Chair of History at UCT's forebear, the South African College, in 1902, just at the end of the South African War. The incumbent was expected to make a special study of the history of the new nation coming out of that divisive conflict.

(Because that history was likely to be partisan and partial to the British version of the story, the Victoria College of Stellenbosch, which would later become Stellenbosch University, rebutted with a rival chair in history in 1904.)

Universities, whether in the teaching or researching of history, have also fallen into that model. He, too, Worden confessed.

But Worden, in his study of slavery in South Africa and Cape Town, had a conversion of sorts over the past decade.

Inspired by other scholars, he became interested in the links of slavery in the Cape with elsewhere. Slave practices here, he now argues, often reflected slave practices in other corners of the world. (In parts of Asia, for example, slaves would be freed after working off a debt; in one document discovered by Worden, a Cape slave beseeches his owner, after 10 years of such indentured labour, to be released from his obligations.)(His request was turned down.)

The link of Cape history to other countries and regions was clear, if unexplored.

"Here were signs of the impact of places from which many of the slaves at the Cape had come, but about their previous lives - in Madagascar, or in South East Asia, or in India, or in Sri Lanka - we were completely ignorant," Worden said.

Retracing those lives and stories was not easy, though. Records were few and far between. ("The nature of slavery is that it ruptures life experiences.")

Over the years, however, Worden has been able to piece together some stories from official documents or archived correspondence. Be it of the Cape Slave Uprising of 1808, of the networks between the Cape and the slaves' homelands, of Malagasy refugees, or the social mobility of women slaves.

"The Cape, at least as far as this period is concerned, was not a closed world, it wasn't an isolated bubble, it wasn't just an outpost of Europe," said Worden. "It was an Indian Ocean and Southern Atlantic settlement in all its diversity, and it was connected directly to the networks of these regions."

And as his further study has shown, the social aftershocks of that period have been felt through the subsequent ages, its social and racial orders extending into later periods, even today.

Fertile ground, Worden suggested, for the teaching and study of a new kind of history.