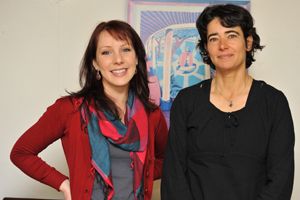 The UCT Research Associateships, awarded annually to "excellent student researchers", have become sought-after funding sources for the university's master's and PhD ranks. "The purpose of the associateships is to align reward and recognition of the research undertaken by master's and doctoral students, and their supervisor, with the university's strategic objective to be research-led," explained Linda Vranas, director of the Postgraduate Funding Office. Recently the Postgraduate Centre & Funding Office celebrated the 2011 allotment with the 22 'Research Associates' who will benefit from the award this year. Seven master's students each received R30 000 towards their research, while 22 doctoral students collected R45 000 each. Among the recipients was philosophy student Jessica Lerm (left, in picture), with her supervisor, Dr Elisa Galgut 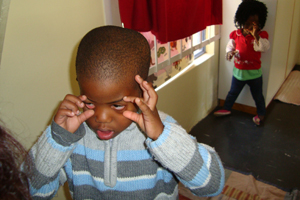 Postgraduate ophthalmic nursing students joined forces with SHAWCO (UCT's Students' Health and Welfare Centres Organisation) on 17 September to conduct eye-screening tests on infants and children in the Imizamo Yethu township near Hout Bay. About 21 infants and children were tested, two of whom were referred for further management. Research shows that, while the number of children who are blind has declined globally by 10% over the past 10 years, the numbers have increased by 31% in Sub-Saharan Africa due to population growth, the region's diseases burden and poverty. Una Kyriacos, senior lecturer in the Division of Nursing & Midwifery, said that if visual problems are not detected early in life, children will struggle at school. 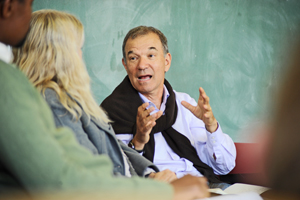 Archives old and new were the topics of discussion at Negotiating Wonder and Taint: An afternoon of conversation with Stephen Greenblatt, a gathering with the famed cultural theorist recently hosted by the Archive and Public Culture (APC) research initiative. Here the APC's Professor Carolyn Hamilton, with Dr Sandra Young and Mbongiseni Buthelezi of the Department of English Language and Literature, joined Greenblatt to muse about the origins and nature of archives, and the often troubled role these archives - "steeped in the coloniality of their formation," according to Young - play in scholarly life in South Africa. One starting point for the conversation was Greenblatt's 1991 Marvellous Possessions, a collection of essays in which he looked at the ways in which Europeans of the Middle Ages and the early modern period represented non-Europeans in archival travel narratives, legal documents and reports. 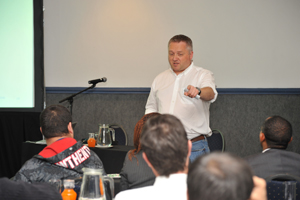 Computer-science academics gathered in Cape Town from 18 to 21 September to explore improving research collaboration in information technology among African scholars. The inaugural African Conference on Software Engineering & Applied Computing (ACSEAC) was hosted by UCT in conjunction with Microsoft, Google and the Institute of Electrical and Electronic Engineers. It saw African and international experts from 19 countries sharing ideas, problems and solutions on computer science research through a series of technical sessions, tutorials and workshops. Among them was Prof Gary Marsden (in picture), who conducted a mobile interaction design workshop, and Honorary Professor Judith Bishop, who presented a keynote address, both from UCT's Department of Computer Science. The conference was the brainchild of graduate Joseph Balikuddembe.