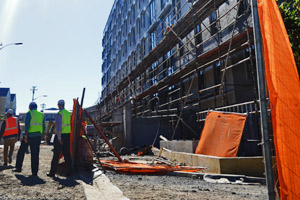 Anyone who's ever visited the building site of Obz Square - the seven-storey residence that will accommodate 887 students from 2012 - will know that everyone there takes safety very seriously. It's an ethic that's earned the construction company working on the site, NMC Construction, third place in the R200-R500-million category of this year's Master Builders and Allied Trades' Association Western Cape (MBAWC) Safety Competition. It's the second MBAWC award that NMC has received for their work on Obz Square - they were runners-up in the same category in 2010. 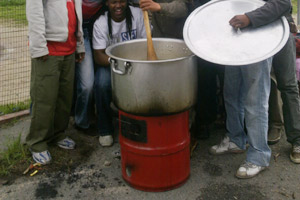 Treated wood for cooking is a health risk for caterers and households in townships. Addressing this issue is the Technology Deployment for Sustainable Urban Development project (TD4SUD), aka the Township Caterers Project, led by Professor Harro Von Blottnitz of UCT's Department of Chemical Engineering. The research project aims to not only prove this claim, but to establish methods of diminishing harmful emissions. To this end, the project has collaborated with students from Engineers without Borders and Students in Free Enterprise to design a mass distribution plan for energy-efficient wood stoves. An awareness event, held at the UCT SHAWCO centre in Nyanga on 13 August included a live stove demonstration and Q&A session. 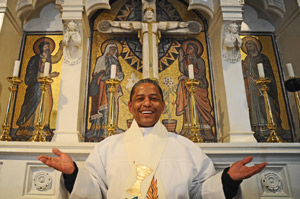 Now in his seventh year as the Anglican chaplain to UCT, Reverend Christopher Swartz celebrated the tenth anniversary of his ordination as a priest at a thanksgiving celebration, hosted by the chaplaincy and the university's Anglican Society, on 8 September. As a full-time UCT chaplain, Swartz describes his work as providing pastoral and spiritual care, as well as building connections with other faiths and support services, such as the Student Wellness Service and the Discrimination and Harassment Office. "Students are at a very enquiring stage of their lives," says Swartz, "so it's important to connect with every available resource to give them as much support as possible.' 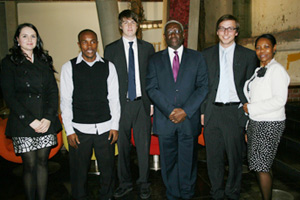 UCT student Timothy Fish-Hodgson (second from right) was runner-up in the LLB Category of this year's Ismail Mahomed Law Reform Essay Competition, hosted by the South African Law Reform Commission and sponsored by Juta Law Publishers. With his essay, Reasonableness as a comparative heuristic, polycentricity, separation of powers and socio-economic rights jurisprudence, Fish-Hodgson took home an Incredible Connection voucher to the value of R5 000. Named in honour of the late Chief Justice Mahomed, the competition encourages critical legal writing by bachelor's (LLB) and master's (LLM) students to explore the links between law reform, human rights and the rule of law.