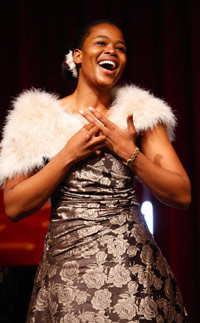 UCT's opera stars Pretty Yende and Dimande Nkosazana have risen even higher, with both sopranos winning international accolades for their standout - albeit short - careers.

Yende shared the joint first prize with US tenor René Barbera in the prestigious annual Operalia, aka the World Competition, which was held this year in Moscow, Russia. The organisation's founder, Plácido Domingo, led the award ceremony, during which he received the Russian Order of Friendship for his work in cultural exchange.

The win is no sign of a break for Yende, who is already scheduled to appear at La Scala in Milan, Italy (where she is now based), in productions of Verdi's Aida and Mozart's The Marriage of Figaro.

Nkosazana was the stand-out performer at the traditional final concert of the Riccardo Zandonai International Competition for Young Opera Singers, held at the Auditorium San Giuseppe in Trento, Italy, on 5 June. Competing with over 150 singers from all over the world, Nkosazana took not only the top spot, but also won the Special Prize sponsored by Cia Opera of São Paulo, Brazil, as well as the MusicaRivaFestival Special Prize.

Now based in Olso, Sweden, Nkosazana is scheduled to appear at the next MusicaRivaFestival (a result of her special prize) at Riva del Garda in Italy, and in an opera in São Paulo, Brazil.