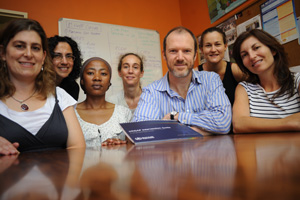 Partners in PRIME: Delegates at the inaugural meeting of PRIME.

The meeting took place in Cape Town on 27 to 30 June, where researchers from partner organisations in Ethiopia, India, Nepal, South Africa and Uganda brainstormed the project's first steps over the inception phase, which runs from May 2011 to April 2012.

Organisations such as World Health Organisation (WHO) - whose clinical guidelines, the mental health Gap Action Plan, will form the backbone of PRIME - and the Centre for Global Mental Health (incorporating the London School of Hygiene and Tropical Medicine and the Institute of Psychiatry, King's College, London), were also represented.

Much of the discussion centred on the project's district demonstration sites, where models for primary mental health care services will be implemented and evaluated in each of the host countries. PRIME partners hope to use lessons from this experience to make concrete recommendations for the scaling up of mental health care in other low- and middle-income countries.

Despite the diversity of partners (including Ministry of Health representatives, epidemiologists, clinicians and health economists), everyone proved to be working from the same script, reports UCT's Associate Professor Crick Lund, who serves as CEO of PRIME. "The meeting went extremely well," says Lund, "and there was a great sense that people have a common vision and are pulling in the same direction."

PRIME is funded by the UK government's Department for International Development (DfID).