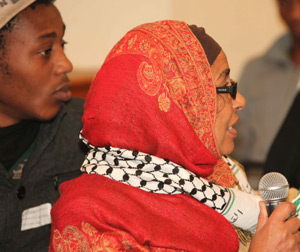 The Institute for Humanities in Africa (HUMA) hosted a very successful Know Your City history workshop at the Iziko Slave Lodge in June.

The workshop is a new initiative of the Cape Town Commons, a forum created by HUMA to facilitate public engagement around relevant social issues. Previous Cape Town Commons events include discussions on To Whom Does Cape Town Belong? and The Future of the Athlone Towers: What should Cape Town become?.

The Know Your City workshop was the first of a series on local history, the aim of which is to share current historical research in an interactive space with the public, allowing people to engage with historical issues that are relevant to them as inhabitants of the city today. Four speakers, from UCT as well as the University of the Western Cape (UWC), spoke on a range of topics that covered the early history of the Western Cape.

Simon Hall, from UCT's Department of Archaeology, covered the last 100 000 years and the highly topical issue of Khoisan identity. He was followed by Robert Shell from UWC who spoke about the history of slavery in Cape Town and the Slave Lodge in particular.

Susan Newton-King, also from UWC, used a particular case study of a freed slave to bring to life some of the details of early colonial society at the Cape. Lastly Antonia Malan, from the Department of Aarchaeology at UCT, went through the urban development of the city of Cape Town.

Representatives from a wide number of organisations and NGOs attended the workshop, including the Social Justice Coalition, Equal Education, the Anti Eviction Campaign, members of the International Labour Research and Information Group, and many others. The event was enthusiastically received and feedback from the day confirmed that the attendees really embraced the opportunity to engage with the history of their city.

The next event in the series will be hosted in July. This second workshop will focus in greater detail on some of the facets of Cape Town's early history that animated interest. Topics for discussion will include the city's formative history of creolisation, slave resistance, and the Khoisan in the colonial period.