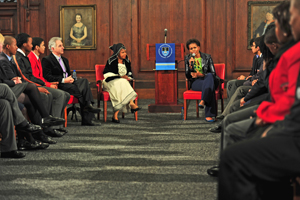 Self belief: US First Lady Michelle Obama (right) speaks to learners in Fuller Hall at UCT. On her left are vice-chancellor Dr Max Price and former VC Dr Mamphela Ramphele.

For 45 minutes or so, they listened attentively; nervously but diligently posed their questions when prompted; chuckled when she cracked a joke, and were the picture of self-restraint, as could be expected in the company of America's First Lady, Michelle Obama, and surrounded by cameras, microphones and security personnel.

The moment the formalities were over, the fetters came off. The 50 high-school learners who'd been invited to UCT to meet with Obama, shook off their reserve and swarmed her, delighted.

Obama responded in kind, and not one of the youngsters left the meeting at Fuller Hall without a generous hug.

"It was very inspiring to meet someone successful who has gone through the struggles that we have gone through, and knowing that we can also be as successful as someone like her," Salama Bavugamenshi, a 17-year old from Oude Molen Academy of Science & Technology, enthused.

As vice-chancellor Dr Max Price pointed out to the learners in his welcome, and which Obama echoed, the day was all about them.

"The essence of Mrs Obama's message reinforces a core part of UCT's mandate," said Price; "to provide opportunities to learners with talent and motivation to gain access to a world-class higher education regardless of social class and in spite of poorer schooling."

And that's exactly the inspirational message the First Lady chose to share with the learners, all hailing from five local schools: the Cape Academy of Mathematics, Science and Technology in Constantia; the LEAP Science and Maths School in Pinelands; Oude Molen; Sophumelela in Mitchell's Plain; and Spine Road High School, also in Mitchell's Plain.

Obama urged them to recognise and embrace their own promise. She encouraged them to believe in themselves and what they can achieve.

"Getting into a school like this isn't some kind of magical process," she said.

She recounted her own life story, and some of her husband's (he had "goofed off" a bit at school, she revealed to laughter from her young audience). She observed that success isn't where one comes from or how much money one has. She encouraged the girls to find their voice and speak out, even when not absolutely sure of themselves (just like boys would do). She also held up the example of former UCT vice-chancellor and guest, Dr Mamphela Ramphele, who also overcame many obstacles. She advised them to seek out those who would add value to their lives

"Barack made me better, and hopefully he would say I made him better too." Pause. Smile. "Let's just say that," she added.

And she also advocated the virtues of hard work and visualisation.

"I can see the same promise in all of you as I do in my own girls," Obama told the learners. "When I see you, I see them; when I see them, I see you."

"What I will take with me is that saying that she had to 'practise greatness'," recalled Merick Swartz of Spine Road afterwards. "I think that practising greatness in our everyday lives could eventually lead to us doing great things one day."