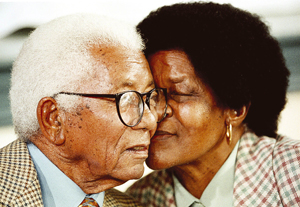 UCT mourns the passing of honorary graduate Albertina Sisulu, seen here with her husband and struggle stalwart Walter Sisulu, who died in 2003.

UCT mourns the passing of struggle icon Albertina Sisulu (92), recipient of an honorary doctorate from the university in 2005.

The honorary degree was a tribute to Mama Sisulu who had "devoted her life to peace, justice and the cause of democracy in South Africa", according to the citation.

Albertina Nontsikelelo Thethiwe-Sisulu, of whom her husband and struggle stalwart, the late Walter Sisulu, had said "she kept the family together under the most difficult circumstances".

UCT conferred the degree of Doctor of Social Science honoris causa on Sisulu in December 2005. Her degree was collected by her daughter Beryl Simelane.

Sisulu, who was born in Cofimvaba in the Transkei in 1918, qualified as a nurse and midwife. She married Walter, then the general secretary of the ANC, in 1944, and played a central role in organising women within the movement during their marriage.

After his life imprisonment in 1964 with Nelson Mandela, she was banned and put under house arrest, while raising five children of her own and three adopted children.

When the ANC was unbanned in 1989, she helped re-establish the ANC Women's League in South Africa and served on its executive committee as deputy president. In 1994 she was elected to parliament as an ANC representative.