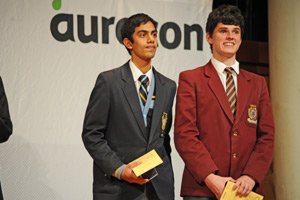 By all measures, the 2011 UCT Mathematics Competition reached some serious milestones.

For starters, a record 6 636 learners from 134 high schools around the Western Cape took part. Secondly, brothers Gerhard and Pieter de Wet of Drostdy High Technical School in Worcester were among the award winners, the first twins to do so.

And grade-12 learner Sean Wentzel of Westerford High School was the toast of the competition's prize giving ceremony on 1 June after the announcement that he had recorded perfect scores every year since he first took part as a grade-8 learner in 2007. Wentzel is the first learner to do so in the 35-year history of the event.

A proud Wentzel attributed his success to a combination of practice, hard work and, a bit of luck. His parents had laid the right foundation, though. "My father [a Professor of chemistry and biology] taught me a lot of scientific ways of thinking, and my mother [a tutoring accountant] gave me the love for numbers."

Another notable achievement was that of Ashraf Moolla of Rondebosch Boys' High School, who tied with Wentzel in Grades 9 and 11, and was second in Grades 8, 10 and 12. Moolla and Wentzel are part of the South African team that will take part in the International Mathematical Olympiad in Netherlands in July. 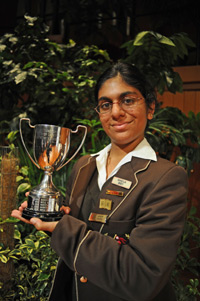 Vice-chancellor Dr Max Price dissuaded learners from jumping straight into the "hardest-to-get-into" careers, such as engineering and medicine, at university, advising them to choose generic degrees first in order to be "well-rounded and better educated" professionals.

Speaking from experience (he first studied medicine, and then a BA degree), Price described it as "illogic and irrational" to think that being good at maths makes students a natural fit to such careers. He placed responsibility for that misperception at the door of the country's higher education system, which he believes is doing a disservice to the youth and the economy.

Most 17-year-olds don't know for sure what they want in life, Price said, and should rather spend the first three years at university studying for general degrees, while using that time to explore further options.